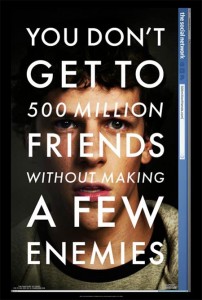 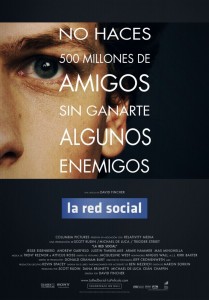 So for those living under a rock, The Social Network sets out to tell the story of how Mark Zuckerberg created Facebook and detail the drama that ensued because of it. What’s telling about the film is that it’s made from the position that Facebook is the most popular website on the planet. Do girls really throw themselves at college web designers? I’m just not buying it. In 2004 when four dudes were coding in a Harvard dorm room, nobody knew shit. This lets the air out of the balloon, but in the interest of the film let’s assume that at least the main players know this is going to be the shit of the millennium. If we assume this we can more readily accept the “movie of a generation” moniker, because it’s only the cool kids defining the generation that are in-the-know enough to not only foresee the needs of the future Internet, but to create it and proliferate it across the globe.

Much has been said of Aaron Sorkin’s writing on The Social Network and overall his work is good. It doesn’t dumb down a lot of the Internet jargon, which was fairly impressive and something I don’t think I’ve ever seen outside of a tech documentary. Computer technology is always a laughable part of fiction films with ridiculous programs created for the film breaking the illusion for anyone that knows or uses a computer regularly. Sorkin’s script doesn’t do that, so I must give him credit for that, but his relentless, rapid-fire dialogue gets old just as fast as the character’s can shoot it out of their mouths. If there was ever a definitive “talking heads” movie, this is it. No shit, in Scene 1 alone there’s gotta be more dialogue than the first thirty minutes of most films. I was exhausted and it just started! There are some genuine golden moments of dialogue throughout though, and it’s impressive for the simple fact that Sorkin was able to make an uninteresting story interesting.

The editing echoes the rapid-fire nature of the dialogue with equally quick editing during the dialogue scenes. This builds a lot of false tension in scenes that aren’t really all that exciting. It isn’t Michael Bay or anything, and there are some quality moments of restraint, but I can’t fight the feeling of being railroaded into thinking I just saw a great movie, when in fact I saw a moderately interesting fictionalized account of the events that succeeded simply because it wasn’t boring. Oh God, it is pretty boring visually though.

The score of the film was composed by Trent Reznor & Atticus Ross and is by far my favorite part of the film. Specifically the music over the opening titles skillfully moves from melancholy melodic piano to haunting, brooding synth, foreshadowing the themes to come. My only complaint about the score is the choice to synth out Grieg’s In the Hall of the Mountain King and put it over the rowing race. It made the whole scene really comical to me, which seemed out-of-place and unneeded. Although, the twin brothers who are on the rowing team were a big source of laughs throughout for me (unintentionally?), reminding me of Tweedledee and Tweedledum, so perhaps the rowing scene was meant to be funny.

The acting is probably the most impressive aspect of the film with Jesse Eisenberg actually holding the film down, despite my best intentions to hate him. I was skeptical that he could pull it off but he really does a good job. Andrew Garfield is also great, and equally surprising is Justin Timberlake’s turn as Sean Parker, founder of Napster. Timberlake plays the rock star well, but that’s not too much of a stretch for him. I can’t complain too much though, he does a good job and is the focal point of my favorite scene in the film, which is oddly enough probably the source of all the “movie of a generation” lines. Timberlake and Eisenberg sit at a table in an over-loud dance club. Timberlake must yell to be heard as the music throbs and the colored lights swirl. He relates how previous upstart companies got fucked over and how this is Zuckerberg’s opportunity to set a precedent and lead his generation. It’s a great scene, but is truly the only one that achieves greatness on all levels for me, and that’s just not enough to carry a whole movie.

I did like the ending though, even though it’s completely ridiculous. Oh look, he’s got all that money, all that genius for programming, and in the end he’s just like us, on Facebook searching for approval. Yay! Movie of the generation! The Social Network isn’t a bad film, but it’s far from great. If nothing else, the film is pretty easy to get into discussions about, so I will give it credit for that and for not treating the audience like they’re stupid, but the computer-generated breath coming out of their mouths I cannot condone.