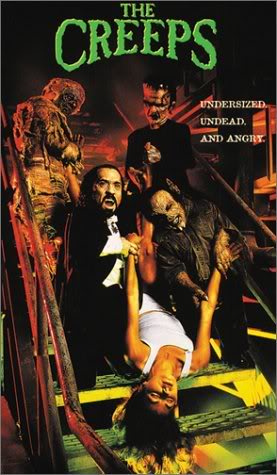 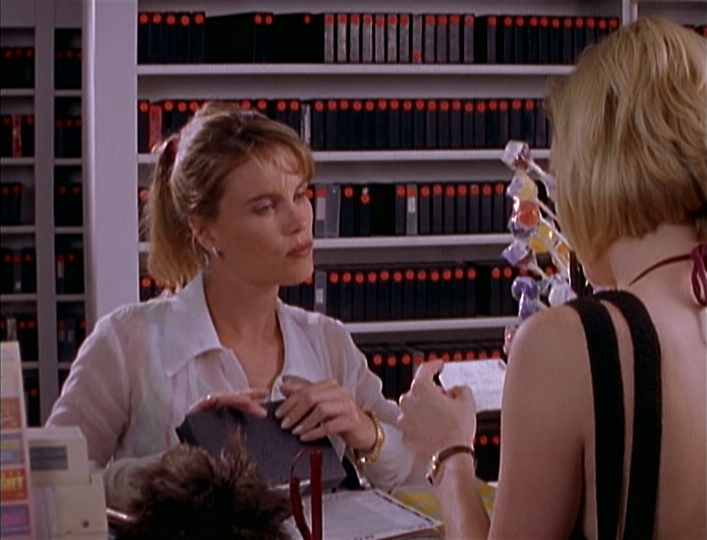 Indulge me just a bit here (or skip down a paragraph). For anyone that grew up in the 1980s, the neighborhood video was a cherished destination, a visit was an event. Prior to the rise of major chains like Blockbuster, it was all random movie lovers setting up shop and stocking whatever they thought looked appealing. The video store in The Creeps is especially fun because it represents the time in my life when I was sixteen and well on my way to film nirvana. The cardboard standup by the door is of Jackie Chan’s First Strike (Police Story IV), a film I obsessed over during this time. Surprisingly, Band does not use the location for simple Full Moon self promotion either (although there is a bit of that). Seeing the aisles of tape boxes brought back memories, but it wasn’t until Anna walked up to the desk that I completely lost it. You see, I’d forgotten all about the amazing VHS walls lining the staff areas of these stores, each tape with a numbered sticker  so that it could easily be reunited with its box when you selected it to take home. I’d just like to thank those involved for bringing that one back to me out of the depths of my mind. The numbered sticker on it must have faded and lost its glue long ago. 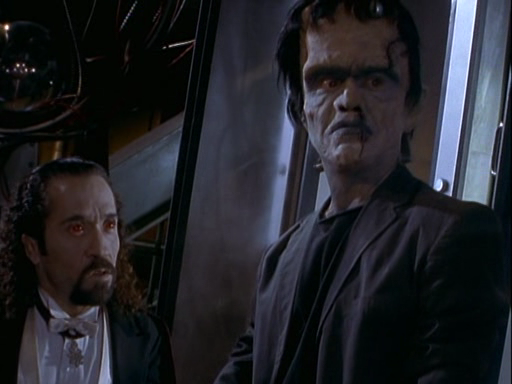 …Ok, ok, back to the review proper. In what is actually a fairly fleshed out plot, The Creeps opens with rare book librarian Anna conversing with a patron about a first edition of Mary Shelley’s Frankenstein, written in the author’s own hand. The patron needs to examine it for a bit, and after turning in the requisite paperwork, he sits down eagerly at the table. The librarian leaves his side, returning to her desk. Out from his pack comes a forged copy, and into his pack goes the priceless original! Great scott!

Our thief takes his prize back to his fog-filled techno lair where gadgets and do-hickeys flash and whirl and it’s obvious he’s up to no good. He places the manuscript into a plastic box next to a chamber, alongside three other identical chambers that each have their own book. He’s built a machine, the Archetype Inducer for those keeping score, that can extract a character from a book and turn it into a real, breathing manifestation of the man. How or why is never really explained, and honestly it’s not necessary. As long as we get some monsters on-screen, they can have a machine that pulls characters out of books and into the real world. 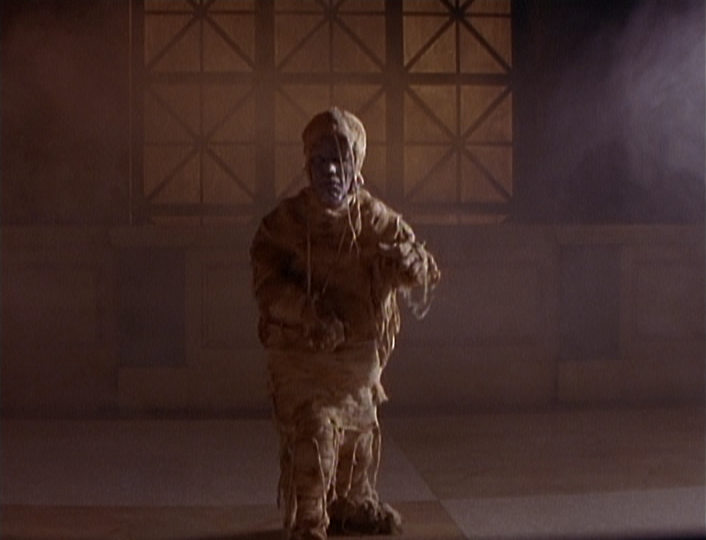 Unfortunately for our mad scientist, something goes wrong during the process and when the monsters emerge, they come out as smaller versions of themselves, hence the little people. This is also the moment when the film picks up. Nothing against the opening, but the monsters are what everyone plunked their hard-earned coin down for, so it only makes sense that they are the stars of the show. Dracula is the only one given any actual dialogue to speak, which is understandable as he is played by the ever-impressive Phil Fondacaro. He fuckin’ devours the role in exactly the way I expected him to, and completely owns the movie. The other monsters are very underused unfortunately, with Frankenstein getting the most representation and a few groans in. Both The Mummy and The Wolfman only get minor moments to shine, but when allowed, they deliver the goods. I specifically enjoyed when The Wolfman drools profusely, directly onto the camera lens. It makes no sense but it’s a great shot. 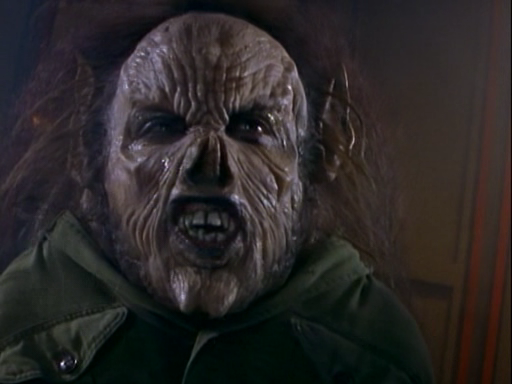 The acting all around is good for a B-movie of this budget and isn’t nearly as bad as I expected it to be. Don’t get me wrong, there are lots of minor annoyances and stilted delivery, but it’s a small percentage of the overall. Charles Band’s direction is a step down from some of his better 80s work, but again it works and never hinders the enjoyment. The film was actually shot in 3D also, which would be highly interesting to watch. I would have never guessed it though, as I didn’t specifically notice anything blatantly flying at the camera ala Friday the 13th Part III. Full Moon apparently released a 3D version on DVD at some point, so that might be worth tracking down.

Sorry gorehounds, this isn’t your movie. While the film carries an R rating (for a spot of nudity), it doesn’t contain even a single drop of blood or gore. In fact, the whole production has the air of a kid’s movie, and if it wasn’t for the breast-exposing shirt-rip, this could have easily been PG. This isn’t the most successful Full Moon movie, nor is it the most enjoyable, but it does have a fun spirit and an enjoyable tone perfect for a B-Movie Halloween night. Phil Fondacaro fans will definitely want to check this one out as well.

Normalcy returns tomorrow to Silver Emulsion as October is over (boo!), so we’ll be back to reviewing the eclectic mix of films (including more horror!) starting tomorrow.