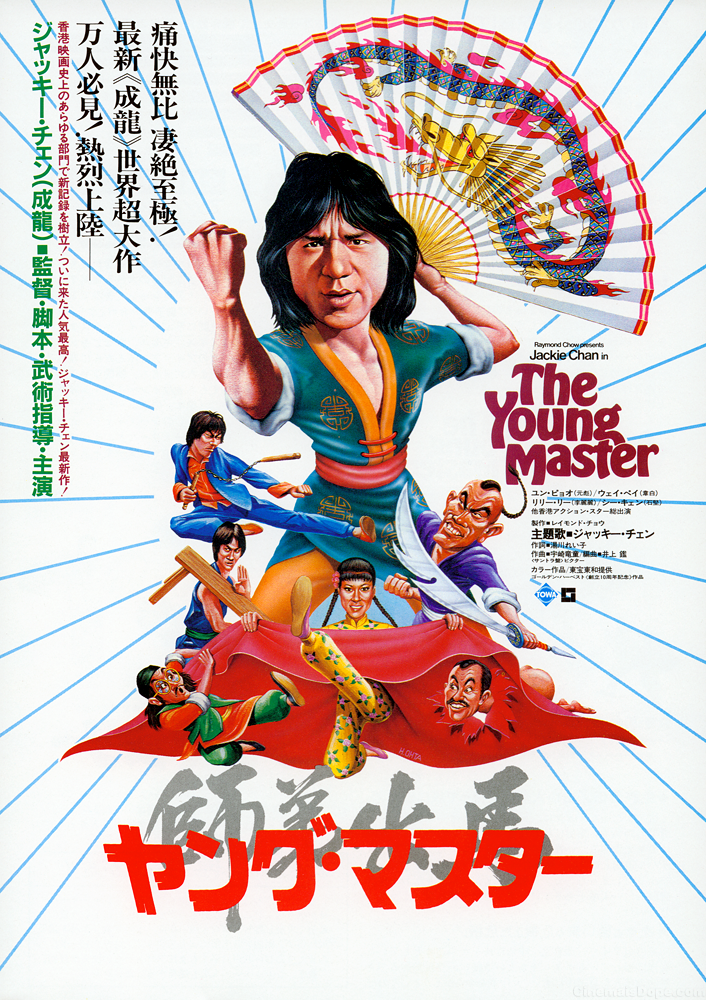 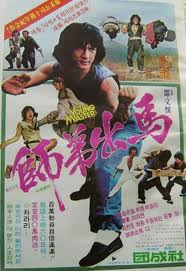 The great thing about The Young Master is that it feels like a breakthrough film. Obviously working with a much larger budget than before, Jackie opens the film with a jaw dropping lion dance sequence that dwarfs anything seen previously in his career. The scene, which features the two lions battling each other on an elevated platform, establishes Jackie’s preference for natural acrobatics and talented stuntmen over floaty wirework and camera tricks.

The plot, which finds Jackie as a goofy kung fu student in search of his expelled brother is merely there to string along his trademark slapstick humor and inventive choreography. But as a director, he has a genuine feel for each scene and deftly weaves comedy and kung fu into the story without making it feel forced or unnatural. I’ve always felt that Jackie’s genius in creating naturally comedic situations was always underappreciated. Take for example when he finds himself pursued by the District Marshall and finds respite in a young woman’s home. While she leaves for the market he decides to bathe in an enclosed shower stall. Unknown to him, the young woman was actually the Marshall’s daughter and while he’s enjoying the bath, the Marshall himself walks in and chooses the neighboring stall. Jackie is forced to improvise while the bathing Marshall blindly reaches into his stall, feeling around for soap and a rag. It’s a very logical turn of events that manages to build tension as well as laughs.

The Young Master also marks Jackie’s first teaming with fellow opera school pal, Yuen Biao, who plays the Marshall’s son. The two have a pretty good bench fight together which features plenty of great acrobatics and the chemistry they share on screen together definitely hints at better things to come. Also worth a mention is Jackie’s cross-dressing skirt battle against Shaw Bros regulars Lee Hoi-San and Fung Hak-On. Donning the bright red skirt, he manages to make total asses of the two heavies as well as himself while matador inspired pasodobles play in the background.

And of course we have to mention the legendary final duel between Jackie and Hwang In-Shik. This fight is noteworthy not only for the obvious reason… Hwang In-Shik being one of the most criminally underrated martial artists of all time, but also because it gives us our first real taste of Jackie the choreographer. The scene comes very close to foregoing the traditional martial arts choreography of the past and carries just a slight bit of that spontaneous, street boxing style of fighting Jackie would later run wild with in films like Wheels on Meals and Dragons Forever. Hwang In-Shik is simply a beast and has a brutal edge that actually establishes him as the better of the two fighters. Just watch in awe as this crazy bastard creates arm bars and devastating wrist locks that seem to come out of nowhere. This is one of those rare kung fu fights that actually make you question if the hero really has a chance at all of winning. His floaty, but powerful kicking style is almost a precursor to the Ken Lo fight scene that would later end Drunken Master II. Speaking of that film, the fight here follows a near identical progression, making it very obvious that Jackie had repeat viewings of this film fresh in his mind while choreographing the fights in DM II almost fifteen years later.

I think it’s a safe bet to call The Young Master the first true Jackie Chan film. In it the first seeds of a great career were sown. It also gives us the first untainted example of Jackie the director, who often seems to be overshadowed by Jackie the actor. Sure the guy hasn’t made the best career choices in recent years, but don’t let that take away from the great body of films he has given us in the past. Even Jackie’s hero Buster Keaton ended his career on a less than stellar note. Beach Blanket Bingo anyone?