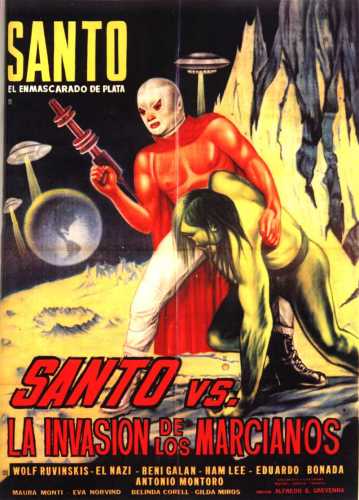 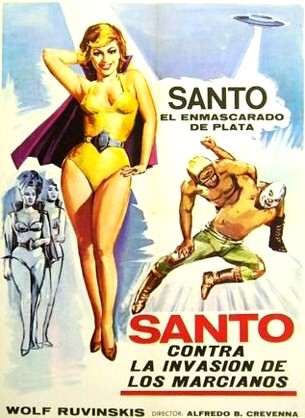 The Astral Eye? Well I’m glad you asked. It is a blinking, plastic eyeball mounted on top of the standard-issue Martian headgear, capable of causing still-shot dissolves that fade human beings out of the image – and presumably, out of existence.

Using Mexico as its guinea pig, one of the Martians attempts to demonstrate the lethal power of the still-shot dissolve Astral Eye by making a crowded park full of happy, weekend-loving Mexicans vanish. Coincidentally, a very zen-like Santo is there spurring on a group of young wrestling enthusiasts to beat the shit out of each other while at the same time dropping his sagely message that violence is not the answer. Realizing that most of the park goers have been disintegrated, Santo proceeds to confront the Martian and after some of that good ol’ wrassalin’ action, the extraterrestrial foe begins choking and gagging uncontrollably before switching on his teleportation belt and whisking himself away to safety.

You see, as a plot device proven fact, Martians are unable to survive in Earth’s atmosphere for extended periods of time. Far from invincible, they must resort to medicinal tablets after prolonged exposure in order to maintain proper lung functionality. This will prove to be a fatal crack in the armor of the Martian Invaders as they will come to rue the day they came up against The Man in the Silver Mask.

As the weary Martian teleports back onto the ship he tells of his ass-handing epic battle with the masked warrior. Intrigued, the Martian officer now makes the capture of Santo for future biological study prime directive number one. 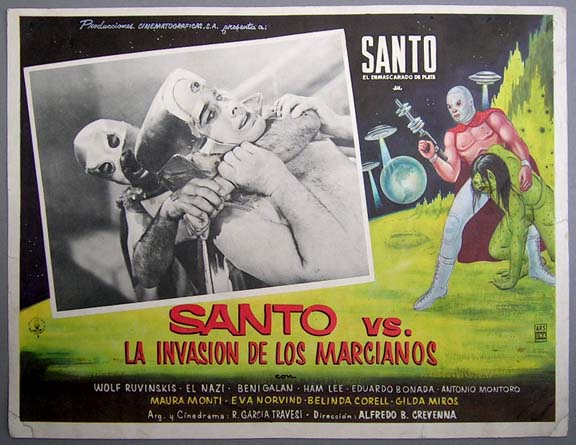 From here on out the film settles rather nicely into familiar territory. The invaders decide that strutting around the streets of Mexico with their Astral Eye helmets and flamboyant silver capes might not work to the best of their advantage, so they decide to go incognito. Stepping into their state of the art Transformation Chamber they emerge, clad in Greek tunics and loincloths. How that is incognito, I haven’t the slightest idea – But Santo has no problem cruising around doing taxes and shit in his mask and costume, so who am I to criticize?

Speaking of mask… in a real king-hell of a shocker, Santo is unmasked in this film – twice! Well, kinda. The first comes as Santo finds himself face to face with the chowderhead Martian heavy, appropriately dubbed Hercules. These two have at it in a winner takes all unmasking battle in the ring. Overwhelmed by Hercules’ Martian strength Santo is helpless as his mask is untied and removed… revealing another mask!! Haha!! Clever Santo! With renewed strength, Santo is able to unmask his adversary before sending him reaching for the teleportation device in another, oxygen-induced choking frenzy. 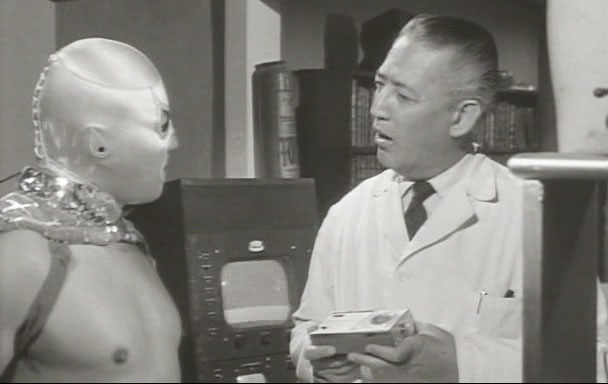 Another riveting unmasking occurs when the sultry Martian bombshells teleport themselves into Santo’s study in an attempt to seduce him, removing his mask as they come in for a passionate kiss. Although Santo’s head is shown from the back for the duration of the scene, it is still pretty unnerving to see our hero’s dark locks revealed after all of these years. I can only compare it to discovering that Santa Claus doesn’t exist, or walking in on your parents having sex. Santo is like the Jesus Christ of B-movies, and any unmasking, even if only by implication could be regarded as borderline blasphemy. Luckily, the scene is further disproved as it turns out to be a hallucination brought about by the temptresses’ magic powers… or something.

At the end of the day Santo vs. the Martian Invasion offers a metric shit-ton of great fights, both in and out of the ring. Add the requisite bombshell heinas, wacky villains, and x-treme movie logic and you have another solid entry into the series. We loves the Santo… viva Mexico!

5 thoughts on “Uncle Jasper reviews: Santo vs. the Martian Invasion (1967)”