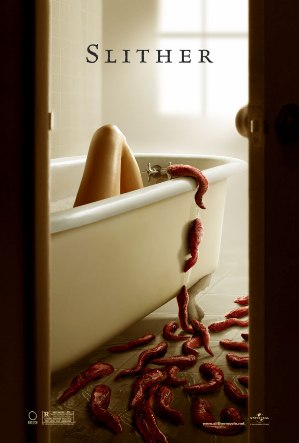 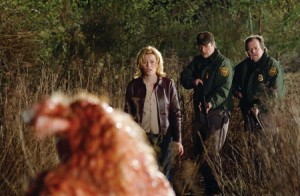 With a plot basically borrowed from The Blob and Night of the Creeps, an asteroid crashes into Earth, landing in a backwoods South Carolina town. It’s later discovered by an angry husband, Grant, and a local bar floozy as they skirt off into the woods to make out. An alien parasite hatches from the smoldering asteroid, burrowing its way into Grant’s body and eventually latching onto his brain. Soon Grant finds himself breaking out in hives and developing a powerful lust for raw steaks as his wife tries to make sense of it all. When she eventually discovers that their basement has been filled with half-eaten rotting animals and her husband has grown a pair of slimy tentacles that emerge from his stomach, the police finally step in to take the monster down.

During the hunt, the monster formerly known as Grant unleashes an army of bloodthirsty slugs which infect the town’s locals, turning them into mindless zombies all sharing the same hive consciousness. Young children and even animals are not spared from the zombie plague. In one of my favorite scenes a rabid, infected deer with half of a head stomps and snaps away at the heroic town Sheriff. 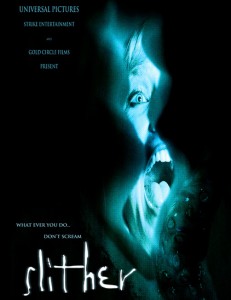 It sounds incredibly corny, and it is. But from beginning to end this movie is simply delicious fun. I can’t begin to tell you how refreshing it was to watch a (semi) big-budget horror film with cojones again. The gore goes far beyond standard Hollywood fare, delivering guts, eviscerated dog carcasses, German shepherd heads, slimy parasitic slugs, mouthfuls of blood, and great stuff we just aren’t used to seeing on the silver screen anymore. The creature FX are fantastic and CG is minimal… proof again that the real shit will always result in a better movie. Gunn injects his screenplay with fun characters and colorful language that left a shit-eating grin plastered across my face for the duration of the film’s 95-minute running time. The foul-mouthed, heavy drinking mayor in particular steals the show every moment he’s on screen. With hilarious one-liners like, “This is like looking for a needle in a fuckstack!” it is probably the most fun I’ve had with cursing and verbal profanity since Planes, Trains, and Automobiles.

It’s funny without being stupid, gross without being disturbing, and pays homage without being a rip-off. Gunn honors all the heavy hitters from George Romero to Sam Raimi, yet manages to imbue the screen with his own brand of trashy gore and off-color humor. In a nod to his Troma roots, a television can be seen playing The Toxic Avenger in the background and Lloyd Kaufman himself makes a cameo appearance in the Sheriff’s station as a “sad drunk.” 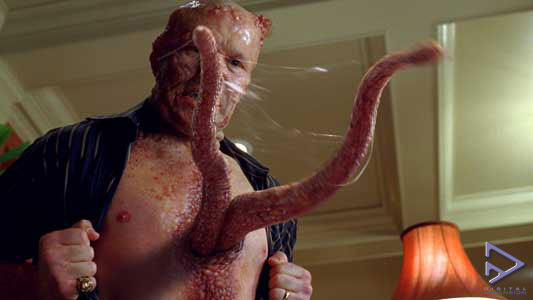 I will forever be kicking myself for missing this film during its original theatrical run. Having an adverse reaction to pretty much every Hollywood horror film to hit theaters in the last 10 years made this an unfortunate victim of collateral damage. I’m gonna guess that that’s why this film never seemed to find its core audience, but hopefully time will find a way to fix that. Slither is classic “town survival against monsters” shit. It’s just not a throwback to video store horror. It offers a glimpse of what horror films can be again if the genre was wrenched away from the Hollywood cash machine and was placed back into the hands of fans.

First Tromeo and Juliet, then this. James Gunn is definitely a talent with a knack for fringe cinema. I am eagerly awaiting his next film, Super,when it hits next year.