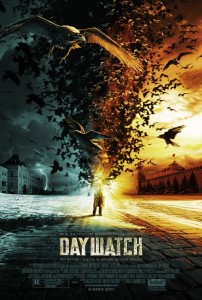 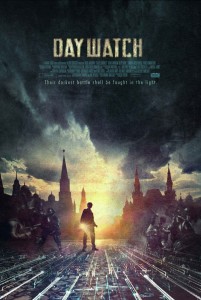 The score is very similar to the score for Night Watch, except for the addition of the lighthearted romantic comedy music. Why the choice was made to go with this type of music, I’ll never know, but I do know that it was a poor choice. Another thing that bugged me,  the music for almost every action scene in both films is the same driving, techno song. I know these films were produced on a modest budget but one or two more cheap techno songs would have gone a long way to make this a better film.

This film also suffers from the same overuse of close-ups, handheld camerawork and fast editing that plagued Night Watch. There’s also some good visuals contained here, like the scene when a bus crashes into one of the Dark Others, but the pacing is so bad that most people probably won’t make it that far. Night Watch was a huge success in its native country, quickly becoming the number one box office film ever, surpassing even Western releases. This must have gone to Bekmambetov’s head because this film is a good 30 minutes longer than the first, resulting in an overlong, over-bloated boring action picture that completely fails to deliver on the promise laid out by the closing moments of its predecessor. 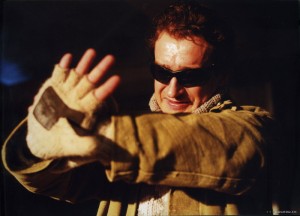 This film’s main plot circles around a mystical piece of chalk that has the power to undo actions that you have set into motion. It’s an interesting idea, but what ultimately happens with it negates almost the entire running time of both films and you are left with a serious case of What the Fuck blues. If only the chalk was real Bekmambetov could have used it to go back and make a better film.

Don’t forget, it takes two to Djan-go! A Fistful of Djangos, our look at eight classic spaghetti westerns starts two days from now, on Monday July 5th! Be there!