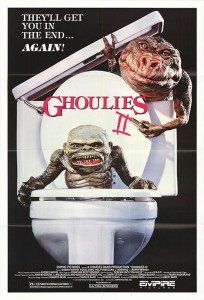 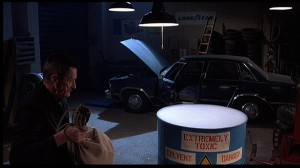 It should be noted that the Ghoulies here are slightly different from in the first film. Their puppets are more defined and better crafted, so they took a little while for me to get used to. Snake Fetus looks like he has grown up a bit, more of a Snake Boy or Snake Teen, but I’m not changing his name at this point. So anyway, Snake Fetus is a little bit older, a little bit wiser. Abominable Monkey Ghoul lost the WTF look on his face, but due to his better designed puppet I can see that they were trying to go for some sort of cat creature. Fuck it, he’s the Abominable Monkey. The other Ghoulie I was calling Station has also benefited from a better puppet and it is clear that he is a rat, so due to his new acid spitting attack I’ll rechristen him the Acid Rat Ghoul. Batling Spider Ghoul gets a lot more screen time than before, but he’s still relegated to swooping past people or stealing something from their hands. There’s also a new Ghoulie, one I call Dinosaur Frog Ghoul, that looks very similar to any random cast member from the 1990s ABC sitcom Dinosaurs. 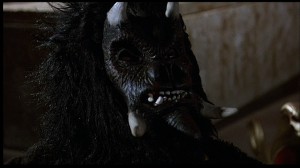 The Ghoulies take up residence within the Satan’s Den attraction and start causing some havoc. The Ghoulies are more proactive in this installment, killing on their own without direct orders from a summoner. This results in a lot more ghoulish fun than the first part. One quick scene I really enjoyed was when one of the owners of Satan’s Den, a retired carnival magician who’s only magic trick left is to make bottles of whiskey disappear, states that, “The great fucking Fausto will perform one of the worst goddamn tricks in the history of phony-baloney magic! He will pull a rabbit out of his hat.” Instead, he pulls out Snake Fetus and throws him against the wall in surprise. It’s hilarious.

As with any carnival-based film, there’s a great range of characters. One of the highlights of Ghoulies II is Phil Fondacaro’s role of a Shakespearean midget actor who is stuck working in the carnival scaring children nightly in a gorilla demon costume. Yes, that’s a gorilla demon costume. And just in case you forget that he’s a bit shorter than the average Hamlet, conversations with him tend to be shot from a very high angle so that he’s constantly looking up. Despite all this, he plays his role very well and is easily one of the best actors in the film. I remember first seeing him and enjoying his work when I was a kid watching Willow back in the day, so it’s always nice to catch him in something I haven’t seen before.

My favorite moment in the film, by far, is when a couple of jaded kids enter Satan’s Den despite thinking it’s gonna be lame. Soon, Acid Rat Ghoul shows himself to them, elevating their lame experience into something truly unique. One of the kids whips out a ninja star of all things and throws it at him. Acid Rat Ghoul catches that shit in his teeth and chews it up! The only response to this is what one of the kids offers up directly after, “Holy shit!” The kids call in a bunch of people who cheer the Ghoulies on as they stuff a dude they just mummified into a casket… Good times! Such good times in fact that the Ghoulies celebrate by high fiving!

Eventually, the Ghoulies decide they should leave Satan’s Den, venturing out into the carnival at large. This becomes a non-stop Tilt-A-Whirl Scrambler of absurd fun and boy do the Ghoulies know how to have a good time. I especially enjoyed when the Ghoulies take over the shooting gallery booth and the Abominable Monkey shoots at Dinosaur Frog and Acid Rat. They playfully dodge behind the moving targets as their buddy shoots at them. The Ghoulies also make good on the promise of the first film’s poster, by finally getting someone in the end via a toilet.

I thoroughly enjoyed Ghoulies II. It was so much better than I expected it to be. All too often in horror movie franchises, the sequels have only a fraction of the inventive spirit and mystique that the original had. Ghoulies II smartly goes in a completely new direction with the tale, but one that still feels like a Ghoulies film. I can’t decide if I like this one better than the first, they are both about as equally fun to watch. It’s a joy to see the Ghoulies back on-screen and what the hell, let’s watch Ghoulies III.

Look for my write-up next Tuesday for Ghoulies III: Ghoulies Go To College.