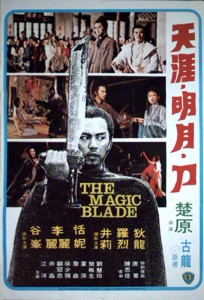 The film opens great. A rich man (Lo Lieh) and his entourage enter Phoenix Town under the cover of night. The servants quickly set up a red carpet and a little stage and put on a dance performance for Lo Lieh. But not for long as the performance is interrupted by Ti Lung, who has come to face off in a duel to the death. They draw their blades and swing them in displays of power and might. These guys are so bad that when they do this, tree limbs and house shutters a hundred feet away fall to the ground cleanly sliced. If you can do that, you’re pretty badass. This doesn’t deter either fighter though and they begin their swordplay. Midway through the fight, a tree suddenly slides over to the fighters, bursts in two and another swordsman jumps out! Then two hands reach out from the Earth and grab Lo Lieh’s legs!  Pretty soon the two that had been fighting each other to the death are now faced off against Earth Evil and Wood Evil, who have come to slay them both! They didn’t count on how badass these guys were though, as the Evils don’t last more than about thirty seconds. Too bad, I enjoyed the Evil’s shtick of busting out of stuff.

After they are defeated we are treated to another great subtitle/editing exchange. Ti Lung says, “Why do they want to kill you? Who are they?” and Lo Lieh replies, “Who cares? I only want to have a drink.” Followed directly by a cut to a sign that reads “BAR.” I laughed at this way more than I probably should have, but the editing here was just perfect. Anyway the two swordsmen realize that they must team up to find the Peacock Dart to defeat their mutual enemy, Mr. Yu. Out of the bar scene we are introduced to one of the minor baddies, the cannibal Devil Grandma. Can’t go wrong with a Devil Grandma. She’s one of the highlights and has a few good scenes throughout.

For me this was a lesser Shaw Bros. film but it’s still got that wonderful production value and raw talent that any film they made has. Personally, I didn’t think the direction was as good as it could have been, but there’s nothing terribly rotten about it. The fights are odd in that they are all so short and insignificant. There’s a lot of little fights instead of a few big fights, and the little fights all seem to end just as they start to show signs of getting good. It’s a shame as there’s a lot of potential here for a great film.

At one point, Mr. Yu rounds up five underworld assassins to kill our heroes. As you can probably imagine, each one has their own style and weapon, but as I said before, the fights are short so that you never really get to see them in action much. Also, the sound of the swords striking each other was different than the standard Shaw sword strike sound that I love. This was off-putting, but ultimately a minor complaint. I just enjoy that particular sound byte so much, I was sorry not to hear it.

The last two fights are excellent fun but aren’t enough to pull this out of being a mid-range film for me. At the end of the day, it’s an average Shaw Bros. film that I enjoyed but am already starting to forget. Check it out if you enjoy films with a heavy dose of swordplay. Ti Lung is great in it as well, deflecting darts like a pro, so fans of his should definitely track this down.