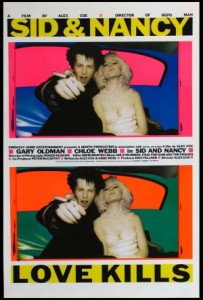 I wasn’t expecting much going into this. I liked the film, but I found it a bit on the boring side. Gary Oldman is fantastic as Sid Vicious, the definite star of the show. That’s also part of the problem I had with the film though, as he outshines nearly every other actor in it. He seems to embody not just Vicious but the punk ethos itself, while the majority of the rest of the cast looks like they’re playing dress-up at punk rock school. I’m probably being a bit biased here, but I couldn’t get past it while watching the film. Chloe Webb is pretty good as Nancy but she does get pretty annoying. I suppose that was part of the point though, so I can’t complain too much.

The film showcases the relationship of Sid and Nancy and seeks to give Sex Pistol fans an insight into their world. I’m just okay with the Pistols (personally I’m much more into The Clash), and I was okay never knowing anything about them. Obviously that doesn’t make me the target audience here, but I still liked it well enough thanks to the wonderful Oldman performance. Many people involved with the Pistols, including Johnny Rotten, have spoken at length about how inaccurate the film is, that no one should watch it, etc. I don’t have a clue what is true or not, but regardless, it tells a believable version of the tale. For me the film was on the borderline of okay and good, I kept jumping back and forth between 2 and 2 1/2 stars, but ultimately I decided that as the days moved on after watching this, the images in my head did not. Watch it if you enjoy Gary Oldman and want to see his breakout performance. It was shot by Roger Deakins too, so it looks pretty nice.

As a side note to all the Oldman fans: I’d also recommend Stephen Frear’s Prick Up Your Ears. It’s a very good film from the same time frame featuring a great Oldman performance and also starring Alfred Molina.

Coincidentally, my colleague Dan the Man has also recently watched this one and has got some thoughts up. Go check out his take on it!