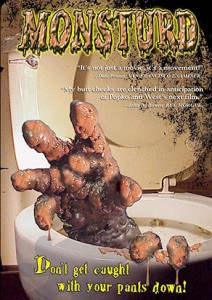 Expectations: My expectations were flushed before I even considered watching this.

I’m not going to beat around the bush, this is one big piece of shit. Monsturd tells the touching story of a prison escapee who falls into the wrong vat of goo and emerges as a giant shit monster. I’m getting ahead of myself though. First, the movie sets itself up as a fairy tale with a little girl waking up from a bad dream. Her father comes to check up on her and when he proposes to tell her a calming story, she refuses and tells him a story of her own. The story of an evil doctor employed by DuTech who unleashes a shit-storm of bad vibes on the town of Butte County, CA by dumping a shitload of toxic waste into the sewer system. When the escaped convict gets trapped in the sewer and falls into the goo he is reduced to nothing more than a bloody skeleton. OR SO THEY THOUGHT!

A man and his wife fight over cleaning the toilet. The wife insists that the husband gets his ass down there and cleans up his own shit. He does so, but as he’s plunging the toilet the shit monster comes up behind him and murders him. The scene is truly awful and laughable but not as funny as you might expect. When the cops come to investigate they see the calling card of the convict, a written message on the bathroom wall. It says, “Don’t Get Caught With Your Pants Down!” in, you guessed it, shit. 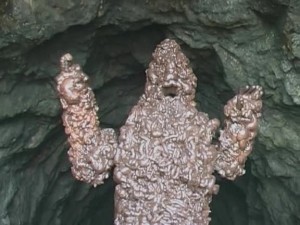 As the film goes on, the cops and the FBI agent working with them figure out that there really is a shit monster lurking around town. They advise everyone in the town not to use their toilets, instead to shit in buckets or whatever else they can find. But this is where the problem truly lies. Tomorrow is the day of the annual Butte County Chili Cookoff! You can’t expect people to go without using the facilities when there’s bowel-burning chili to be judged.

The acting, directing and lighting are all equally awful. There’s not really any gore in the movie which is a supreme disappointment as these little movies can usually get away with more hardcore gore than a mainstream picture. It is not to be though as the focus here is firmly on shit. The film was shot on a camcorder and for a camcorder movie it’s better than I expected it to be. That isn’t saying a lot but it was good enough to watch the whole thing. I’m a bit more masochistic than most when it comes to shitty horror movies though, and this is easily the most full-of-shit movie I’ve ever seen. Never before has a movie lived up more faithfully to its name. This one is truly a Monsturd.