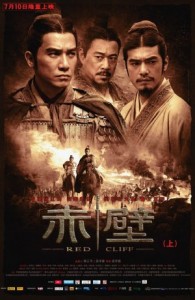 The story is based on the Chinese classic historical novel, Romance of the Three Kingdoms. It chronicles the story of Sun Quan and Liu Bei defending the Southlands against the Imperial Army led by General Cao Cao. Fighting on the side of the South are Guan Yu and Zhang Fei, who you will be familiar with if you’ve ever played a Dynasty Warriors game (which is also based on Romance of the Three Kingdoms). Being a fan of the Game Boy Advance version of the game, it was a treat to see these characters come to life.

The film is well shot and surprisingly colorful. For me, there was an overuse of close-ups but Woo’s choice to film his dialogue scenes without over-the-shoulder shots wins him so many points that I don’t mind the close-ups so much. There are computer-generated effects in the film and they are easily the weakest link. There are times when they aren’t bad, but some of the effects are ridiculous and laughable. Towards the end there are some overhead shots of horses running into formation and the animation on them is horrible. Truthfully, it’s a small annoyance in a great looking shot, so I can easily shrug it off and continue watching.

I fully recommend Red Cliff: Part I to anyone that enjoys foreign films or has enjoyed John Woo’s work in the past. For those that have never seen any of his films, it’s not the best starting point for his work, but you could easily do worse (see: Paycheck … actually, don’t see it).

And yes, before you ask, there are doves. Lots of doves.

Don’t forget to check out my review of Part II!