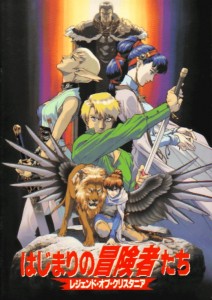 This film supposedly ties into an anime series called Record of Lodoss War. I saw that series once upon a time, but I honestly don’t remember much about it. I even had trouble remembering its name just now. It developed a cult following for some reason, but I never really saw why. I enjoyed it at the time, but it never struck me as particularly great, or even unique. Legend of Crystania has left much the same impression on me, and like Lodoss War, I will probably forget most of it in a month or so.

It’s actually rather hard to come up with anything to say about Crystania, because there really isn’t anything good or bad about this film. It’s positively average. It’s a typical revenge story where the main character discovers that vengeance won’t make his life better, just like every other revenge story out there. It’s also a typical fantasy adventure across a magical landscape that really isn’t all that amazing because we’ve seen it all before. And it’s the typical coming of age tale of a young nobody getting sucked into a grand adventure and becoming a stronger and more reliable somebody.