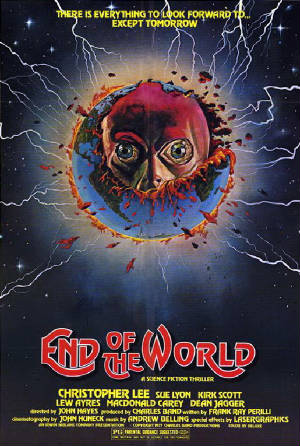 Expectations: Low, but it has Christopher Lee so that’s something.

Plainly put, End of the World is awful. Just wanted to get that out of the way. It’s awful in one of the worst ways a movie can be awful too. It’s excruciatingly boring. So boring that the entire film is summed up within the Netflix summary paragraph, leaving out only minor occurrences. Next to nothing happens in this one, but surprisingly the movie ends on such a high note that I can’t help but think back fondly on the experience. This is the other 1977 film about first contact with alien lifeforms, and actually was released a few months before the more famous film.