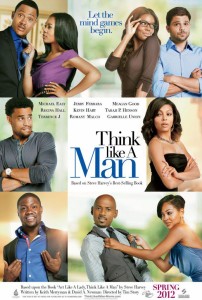 Expectations: High. I have it on good authority that this is funny.

I don’t have much to say about Think Like a Man. It’s well-made, funny and engaging. It’s easily one of the best and most interesting modern romantic comedies I’ve seen in a while (not that I make it a habit to see that many). This could be that the male focus of the film led me to care more about the relationships at hand, but I think it’s more to do with the structure of the film. Instead of one relationship getting all the screen-time, Think Like a Man charts the course of several relationships at once, so at all times there is something new happening with our fun, interesting characters.

Due to this wide focus, the film’s relationships aren’t that complex and they’re somewhat unbelievable, but it’s a romantic comedy so whatever. It’s not about depth and believability, it’s about making you laugh and making you feel a swell of romance in the key moments. And Think Like a Man does that really, really well. The writing is especially snappy, and the entire cast performs admirably. It’s a shame that I don’t really know who many of the actors and actresses in this movie are, and hopefully that will change going forward. It was a treat to see so many positive black characters in one movie, complete with a token white guy! I loved that. It’s a total reversal of traditional Hollywood film casting, and I wish more mainstream films would echo that. The US is rather multiracial, doncha know.

Like all romantic comedies, it does fall into the formulaic trap of being obvious and ending just as you guessed it would at its outset. But where that might usually bother me, I was so taken with the characters and the quality of the comedy that I didn’t mind one bit. I think I finally understand how all the similar romantic comedies continue to do so well: if you connect with the film’s journey then its formula doesn’t matter. I guess that’s the same for all genre films, but for some reason I never considered it an option with romantic comedies. You learn something new every day.

Don’t worry, though, I’m not going to change the focus of Silver Emulsion to a chronological examination of the romantic comedy (although I have to admit, that does sound rather enticing to me), but I will definitely go into future romantic comedy films with a different mindset. Who knows, maybe I’ll become a big fan of them yet.