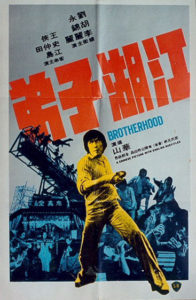 Brotherhood isn’t much of a martial arts movie, but it does have a lot of action that happens to include a lot of fighting. Liao wields a weird weapon: a long chain with big steel balls at each end. No idea what it is, but he knew how to use it and he definitely does his share of major damage with it! Liao also uses a bench for a short time (always a favorite weapon of mine), Chiang Tao uses a big spike that had me wincing with every use, and even when it’s just fists and legs Hua Shan cuts the fights quickly to add to their already chaotic, desperate nature. He also uses the quick cutting to insert lots of brutal gore and violence for split seconds so it subtly seeps into your subconscious and somehow becomes more horrifying. The typical moments of the Yuen brothers choreographing tons of people smashing through/onto/into props is also present in many of the fights, but perhaps most notably they choreograph a fight in an office between at least 10 people and not a single thing gets smashed! People hit walls and they crash into tables and railings, but nothing breaks! There were so many moments of “almost,” and that tension really added to the fight for me. I imagine it would play normally for others, but as someone who looks forward to the smashing it was a treat to see its complete, deliberate absence.

The action is also heightened a few times by the type of real-life danger that later Hong Kong films became known for. Fights on treacherous scaffolding with 747s flying low overhead, climbing up the sides of building without safety rigging, etc.; there’s a guerilla quality to the filmmaking slowly becoming commonplace in this era of the Shaw studio. Films like this show the transitional nature of the mid-to-late ’70s in Hong Kong, and lead directly into the late ’70s/’80s revitalization with the Hong Kong New Wave. Interestingly, Jumping Ash, the film regarded as either the first New Wave film or a distinct, stylistic forerunner, was released just a month after Brotherhood. I would include Kuei Chih-Hung films like 1974’s The Tea House or The Killer Snakes into the category of stylistic forerunners, as well.

Probably the most interesting part of Brotherhood is when it dives into the triad’s rituals and ceremonies that form and strengthen its bonds of brotherhood. From the title, I expected something closer to Chang Cheh’s interpretation of brotherhood, but very little of that traditional heroic brotherhood stuff is contained within Hua Shan’s film. To be honest, there’s actually more distrust and betrayal here than evidence of strong bonds, and perhaps that’s the point of the movie. The triad (or any type of gang, really) is built up on the idea of the brotherhood that is everlasting and binding, but if that held true there wouldn’t be much need for films about these criminal organizations, now would there?

Brotherhood isn’t great, but it’s very entertaining and its depiction of the triad rituals is superb. Woo Gam also shines in her role as the powerful Rose Zhang, to the point of completely outshining the normally charismatic Lau Wing as our main character.

Next up in this chronological journey through the Shaw Brothers Martial Arts catalog is Lo Chen’s fantasy musical The Snake Prince, starring Ti Lung and Lin Chen-Chi! See ya then!