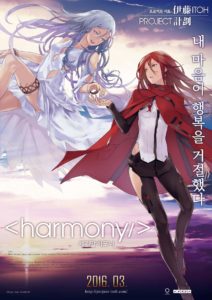 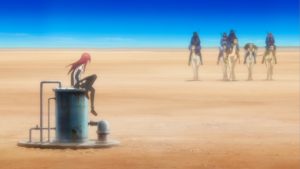 While there is an investigation to follow, and the idea that the only person with a chance to stop the madness may herself be sympathetic to that very insanity certainly adds to the tension, that’s not the real focus of the film. Often told through flashback, the story is more about Tuan and Miach, their relationship, and the ideas that Miach instilled in Tuan. Those ideas are despondent critiques of the super regulated healthcare system, Watch Me, that runs the lives of everyone. The Japan of the future is shown as a uniform society where everyone lives according to the system, never questioning it despite its complete control over their bodies and lives.

Harmony reminds me a tad bit of Fight Club with its philosophy of violence as the only solution to a world without freedom, as well as Apocalypse Now‘s solitary quest to find a psychotic madman. Add in a dash of Ghost in the Shell‘s questioning of what freedom and human consciousness mean in a high-tech world, and then you’ve got something in the neighborhood of Harmony. The film specifically references Brave New World so I’m sure there are some parallels there, but I’m afraid I’ve never read that book, so I can only work with what I’ve got for comparisons here. 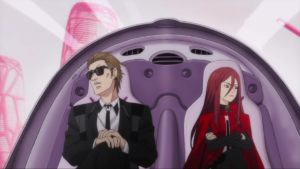 The film is far more thoughtful than action packed, and it dives into theories of how humans make decisions, theories which parallel how societies work. It is filled with interesting ideas that had my head reeling, and that is always the hallmark of good science fiction. But despite having no fantasy in it at all, Miach always feels like a fairy out of myth and legend, playful and alluring. She is otherworldly. Her thoughts are alien and her motives inscrutable. Harmony kept me glued to the screen not with tension over whether the world would be saved, but with curiosity over what was the driving force behind Miach’s ideas and what kind of a world they would create.

But as much as I found the film to be fascinating and entertaining, it’s certainly not without its flaws. The most obvious of them is the heavy use of CG, which really pulled me out of the experience at times. Even beyond the CG, the film’s animation is not all that impressive. There are a few moments that look pretty cool, but for the most part the visuals left me a bit underwhelmed. In a more action-oriented film this would have been a bigger problem, but Harmony isn’t all that reliant on its looks. It’s the thoughts behind the story that make it interesting, so I can look past the animation. 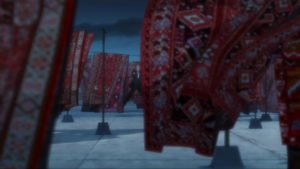 Unfortunately, the ideas that drive the story have some significant flaws of their own. Miach’s philosophy drives the entire story, but in retrospect I’m not sure they make all that much sense. There’s some inherent conflict in her ideals, which on the one hand desire individual freedom and removal of the restrictions of the Watch Me system. But on the other hand her goals seem to be the eradication of human consciousness, which would imply the eradication of the very free will she seeks to have. I want to watch the film again to take a second look at her goals before I write them off as nonsensical, but at the moment she feels more like a deranged lunatic than the genius visionary that Tuan sees her as. Perhaps that’s actually the point, and if it is, then the end of the film has a completely different meaning than what’s immediately obvious.

But what really bugs me about the film is the lack of evidence for Miach’s point of view. She claims the Watch Me system is horribly flawed, spreading misery and death rather than safety and happiness. The problem is, nothing in the film shows us this dark side of society, and that more than anything undercuts Miach’s whole philosophy. It mentions that in the early days of the system there were a large amount of youth suicides, one of which was the one Miach orchestrated, but it implies that those suicides have since stopped. 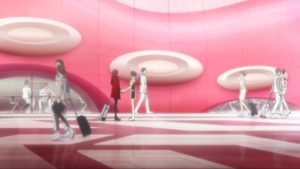 The only actual argument against the system in the film is that it makes people so intent on their duties as a proper citizen that they become miserable when seeing a total stranger die and are wracked with guilt over not being able to help. This sounds like a pretty minor problem to deal with when the benefits are near complete elimination of disease and near immortality from all the advanced healthcare people are getting, as well as an apparent absence of crime and poverty. And while the film doesn’t expressly state it, it seems that such a healthcare-oriented society would have effective and readily available grief counseling for all those troubled folks who are sad about total strangers dying. The only real problem I can see with this society is that every single building in the country appears to be painted bright pink, both inside and out. But if your eyes can adjust, future Japan seems like a pretty damn good place to live.

So my opinion on the film is a bit mixed. It has a lot of lofty ideas and a strong narrative arc as Tuan searches for closure to the most important event of her life. But the film could have used some better animation and those lofty ideas don’t quite pan out. Still, I’m glad they tried. It put new thoughts into my head and was pretty entertaining along the way. For me, it was well worth the two-hour investment of my time.