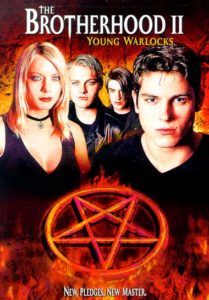 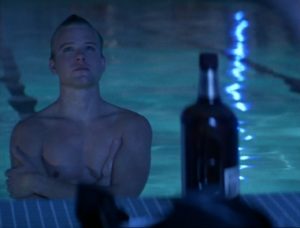 The Brotherhood II: Young Warlocks centers on John Van Owen (Sean Faris), a college student who just can’t muster the courage necessary to ask his crush, Mary (Stacey Scowley), out on a date. His friends are equally nerdy and awkward — although John refers to them as “The Troublemaker” and “The Con Artist” — and they are all subject to some standard jock bullying at the hands of Harlan (Noah Frank) and his buddies. Enter the new kid on campus, Luc (Forrest Cochran), who promises John and his friends unspeakable power if they listen to his wisdom and follow along with his strange rituals.

The warlock mythology is intriguing, but I wasn’t as drawn in as I was for the vampire stuff in the first film. Instead of layers being peeled back, it felt like it was all out in the open within a few minutes. That doesn’t make what’s here any less fun, but it takes away the first film’s mystery without much to replace it. That being said, the film is peppered with scenes like the one where Luc makes his warlock recruits lick tears from his eyes after lots of slow-motion frolicking in the pool. That scene also has a seemingly never-ending booze bottle which is upended into the recruits’ mouths multiple times, and although it’s clearly almost empty every time, it never fails to deliver another cascade of alcohol the next time around. Some might call this a continuity error, but I call it entertainment. 🙂 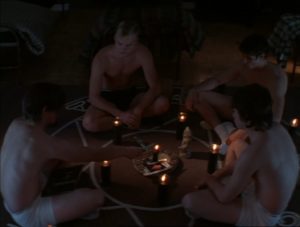 In true DeCoteau fashion, most of the big moments of the film happen with the male characters in their underwear, and honestly I wouldn’t have it any other way. A scene with a bunch of dudes sitting around a candle-lit pentagram is fine, but if they’re all in their boxer briefs it adds a je ne sais quoi that elevates it into something truly memorable. This series is often called homoerotic horror, and I guess that’s true, but I think that distinction is far too limiting. One of my favorite aspects of low-budget filmmaking is the ingenuity and the creativity, and it’s little things like DeCoteau’s love of dudes in briefs that makes me love B-Movies even more. If that’s weird, then I don’t want to be normal. 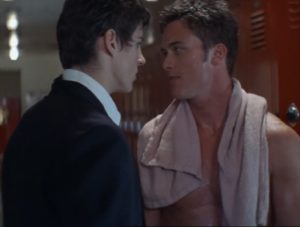 Which brings me to my main issue with The Brotherhood II: Young Warlocks, which actually has nothing to do with The Brotherhood II: Young Warlocks. I watched the movie via Amazon’s streaming service and the only version available was the fullscreen, pan-and-scan edition. If I had known this I probably would’ve tracked down a widescreen DVD, because as much as it might seem superfluous for a movie like this, DeCoteau does a great job working within the 2.35:1 ratio. The Brotherhood was one of DeCoteau’s nicest looking films, so to see the sequel in this inferior manner was unfortunate.

Regardless of my hatred of pan-and-scan hackjobs, The Brotherhood II: Young Warlocks is a very entertaining sequel to The Brotherhood that any fan of DeCoteau should seek out. It’s not as good as the first film, but I also feel like this one probably has its fans that like it better. Watch it for yourself and decide!

Next time I get around to a Full Moon movie I’ll be checking in with the Moonbeam film Frankenstein Reborn, also directed by David DeCoteau! See ya then!

One thought on “The Brotherhood II: Young Warlocks (2001)”