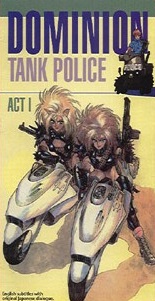 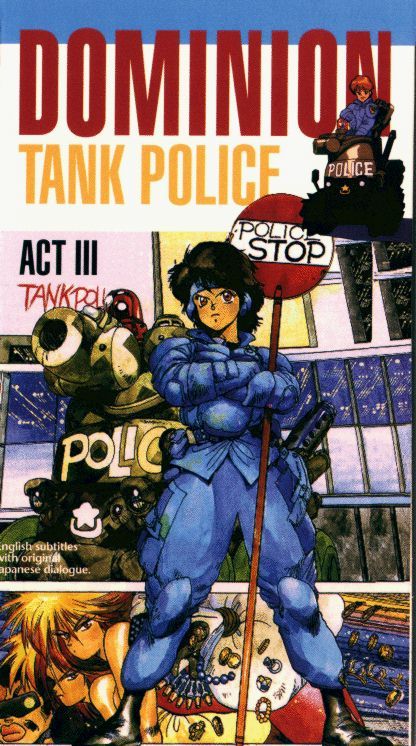 The story itself is about Leona, a new officer transferred from the motorcycle division who bears a strong resemblance to Noa from Patlabor in both appearance and personality. As a new arrival and the only woman on staff, she’s unfamiliar with the way things work here, especially the large and cumbersome tanks since she is used to driving motorcycles. The plot is a fairly typical tale of fitting in and winning acceptance from the others, replete with using her own unique talents to save the day, in this case by building a smaller, more mobile police tank that can outmaneuver the bad guys.

The main villain is Buaku, an android that has the words “we’re mad” emblazoned on his goggles (though whether it refers to anger, insanity, or both is up for debate). But the real stars of the gang are the Puma Sisters, cat girls that are equal parts sultry temptresses, violent lunatics, and ditzy blondes. Somehow they became the most iconic characters of the franchise, and two of Shirow’s most recognizable characters. It probably has something to do with the scene where they put on a striptease when they get cornered by the S.W.A.T. team.

The first two episodes focus on Leona’s efforts to fit in with the rest of the tank police, but the third and fourth episodes stick her with Buaku, who attaches a “bio ball” onto her neck. Without the antidote, it will constrict tighter until she chokes to death. Buaku is the only one with the cure, and he’ll only give it to her if she helps him get away. Leona finds herself in a moral quandary that only deepens when she learns about Buaku’s past as an escaped lab experiment, and his current heist to steal a painting of himself when he was still just a lab rat. 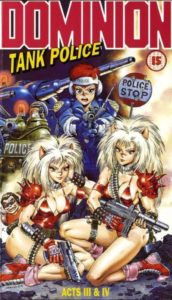 If it sounds like the series switches gears at the halfway point, you’d be partially correct; the series does switch directors after the first two episodes. But if you think the series turns less comedic, you’d be wrong. It is every bit as silly and rambunctious at the end as it is in the beginning. You see, when I said this was a cyberpunk comedy I didn’t mean that it was a parody of cyberpunk. I meant that it is a true blending of the two genres. It plays its cyberpunk elements completely straight, even when it’s joking. Dominion is frequently both absurd and serious in the same scene, sometimes even in the same line of dialog.

The series’s opening is the perfect example of this. It begins with an argument between the mayor and the chief of police about whether the police should even have military equipment like tanks in the first place. The chief’s argument that the police should have anything, even nuclear bombs, if it will deter crime is both absurdly comedic and yet straightforward in establishing the setting of overextended police authority in Dominion. Today, in the wake of public outcry over the militarization of American police forces and their disastrous consequences in places like Ferguson, this debate seems almost prophetic and deeply disturbing.

There are a host of intriguing science fiction concepts running under the surface of this series. A bacterial cloud hovers over the city, and everyone wanders around wearing gas masks in public. But it turns out that most people have adapted to the pollution and don’t really need all the technology they use to clean the air. It’s a concept reminiscent of the miasma from Naussica. (And it would be interesting to think of Dominion as a distant prequel to the wars and devastation that brought about Naussica’s poisoned world.) 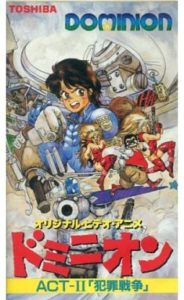 The Puma Sisters are clearly not human, and Buaku’s origins are tied up in experiments to uncover the nature of the human soul. These are experiments that leave him questioning the nature of his own existence and the difference between him and actual humans. Shadowy organizations engage in secret battles for information. Everywhere you turn there is a new element of the story steeped in cyberpunk themes, and despite the comedy inherent to the series these themes are not what the jokes are about.

What seems lacking with these themes, though, is any kind of conclusion. Maybe it was just too hidden behind the jokes for me to suss it out, but it feels that despite all the high concepts floating around, the series has nothing in particular to say about them. I suppose saying too little and leaving us asking questions is better than saying too much and revealing that you never had anything worth saying in the first place. But it still leaves the series feeling somehow incomplete and unfulfilling.

I’m left with a large amount of uncertainty with this series. Its tone is dark and dismal while its mood is light and cheerful. This juxtaposition is disorienting and makes it difficult to decide whether the dual nature of this series is its greatest artistic success or its greatest artistic failure. I suppose the ultimate question is, “Was it entertaining?” Well, yes. I was certainly entertained at any rate. Very much so, in fact. Whether you feel the same way will probably depend on whether you can accept that strange disjointed tone or if it will just piss you off.