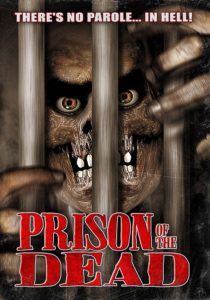 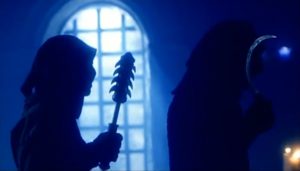 I don’t know about you, but as soon as I heard that it was a Puritan prison, I had a big smile on my face. It could have easily been a generic prison of the dead — and to be honest the Puritan angle doesn’t really figure into the plot much — but I really admired the effort of placing the story amidst a well-known period of American history. It gives the film an extra charm, making the Skeletor-esque executioners wielding medieval weapons even more entertaining than they already were.

The characters in Prison of the Dead are especially annoying and unlikable; one of them even asks at the beginning of the film, “Why don’t they like us?” It’s cuz you’re all assholes, sweetheart. These kinds of annoying characters are a hallmark of horror films, but viewers can usually find solace in the knowledge that they are more than likely to meet a grisly end. Due to the production year and the limits of the budget of Prison of the Dead, there aren’t any exciting special effects or gruesome gore to punctuate these moments. That’s a big strike against any horror film, but for the rather jovial yet foreboding tone of this film, it actually kind of works. 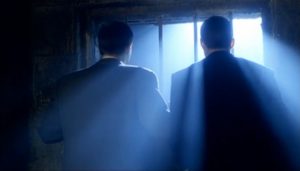 Prison of the Dead is surprisingly funny, and its mostly — if not all — by design. It seems pretty apparent that DeCoteau knows he’s not making a scary film, so he really doubles down on the comedy and attempts to wring the most fun out of the bonkers premise that the budget will permit. From the long-dead executioners rising from freshly tilled earth, to the ridiculous slo-mo fight at the end, there is a lot to laugh about and enjoy in Prison of the Dead.

The dialogue is just as crazy as the plot, and while the delivery by the actors could easily be better, you can’t argue with lines like, “Knock, Knock, Motherfucker!” or “This has the believability of a bad Baywatch Nights episode.” It’s bad, but it’s creatively bad. The film is filled with ridiculous moments, too, such as the Ouija scene. These people are all supposed to have inquisitive, knowledgeable minds for the paranormal, but someone busts out a Ouija board and suddenly everyone’s scared shitless! Choruses of “I don’t want to touch it,” “I don’t want anything to do with this!” and “Get that thing away from me!” all around, and I truly enjoyed every moment of it. 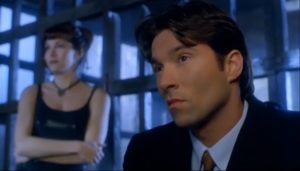 That being said, the dialogue is also one of the film’s real issues. Prison of the Dead is barely 70 minutes, but a good portion of that is people talking. This is fine when they say outlandish, funny things, but there’s just as much meaningless chatter to pad out the runtime. Thankfully, it’s paced relatively well so there’s not really a long stretch of this, but it does wear down your patience after a while. And since everyone’s tolerance of B-Movies and their various charms is different, this could easily be a deal breaker if you’re not on-board with the other elements in play.

I can’t argue with anyone that calls Prison of the Dead an awful movie, but I unashamedly enjoyed the hell out of it. It’s also lit very well and DeCoteau nicely takes advantage of this with his camera, although if you don’t love the color blue you might be of a different opinion (because EVERYTHING’S blue).

And surprisingly for a DeCoteau film, there’s only one shirtless guy in his underwear! Even his more mainstream film, Skeletons, had a couple!

Next time I get around to a Full Moon movie I’ll be watching David DeCoteau’s Talisman! See ya then!