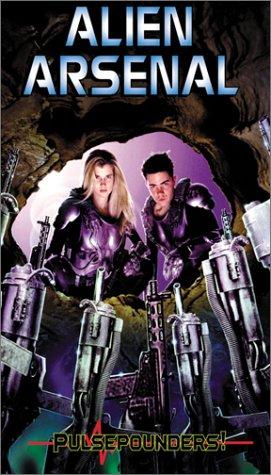 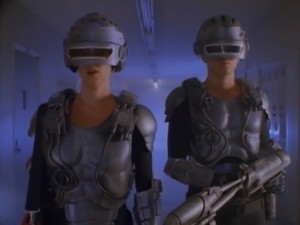 Ralph (Josh Hammond) is a classic dork, but because his best friend Baxter (Danielle Hoover) is a tomboy, together they enroll in their high school’s “Introduction to Manual Labor” class. Don’t remember that one from your high school career? Allow me to jog your memory! It’s the one where you go into the school basement and learn how to use a pickaxe while helping to excavate for the new teacher’s lounge. Ralph and Baxter are late to the first day, though, so their teacher Mr. Lipkis (Robert Donavan, who has an R. Lee Ermey thing going here) punishes them with detention scrubbing the basement’s brick wall with toothbrushes (and as Baxter notes, “They aren’t even Reach toothbrushes!”). One thing leads to another and pretty soon they have uncovered an alien bunker behind the brick wall — complete with an easy-to-use “Total Recall three-fingered hand” door lock.

Inside they find not just alien weapons, but alien armor that somehow magically appears on them whenever it’s needed in the film. The first time we see it Ralph puts on a pair of gloves, smashes a rock into oblivion and then the armor appears on him. Huh? Anyway, what matters is that the armor makes Ralph and Baxter super-powerful and bully proof. They also discover that one of the guns teleports its target into some alternate dimension, and another gun just makes HUGE explosions. Oh, I can’t wait anymore — LASERBLAST!!!!!! 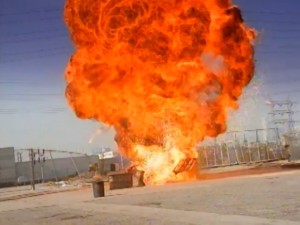 In terms of the LASERBLAST quotient, Alien Arsenal is both very satisfying and incredibly disappointing. First off, the explosions we get are A-plus fantastic. The first LASERBLAST is a humongous ball of fire reaching high into the sky. Later, the aliens give chase and their laser pistols trigger a bunch of equally exciting MINI-LASERBLASTS. This is maybe half-way through the movie, so being a big fan of the original film, I imagined the liberal use of explosions and LASERBLASTS in Alien Arsenal might culminate in an unbelievably fiery inferno of pure LASERBLAST carnage. But see, this is where the loose remake’s plot derailed the whole LASERBLASTING good time.

There’s no reason to beat around the bush (and really, that bush should’ve been burned in a fiery LASERBLAST by now): The finale of Alien Arsenal doesn’t involve any LASERBLASTS or explosions. In a remake of a film built upon the premise of an alien gun allowing a teenager to literally explode anything he wishes to vent his frustration with the world, writing a plot to specifically remove this cathartic ending is tantamount to treason. If the overall film weren’t so damn much fun, it really would have crushed me. But instead, because I was already buying whatever this film was selling, I looked for a logical thematic reason why this film didn’t end in flames. 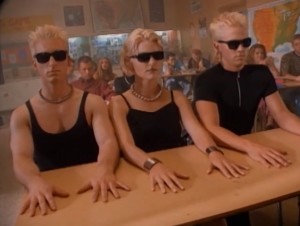 If we look at the two characters that lead each film, I think we have our answer. In Laserblast, Billy was a kid humiliated and picked on by almost everyone in his life. Even his mom wasn’t on his side! But Ralph in Alien Arsenal has a pretty close best friend in Baxter, and even though he’s clearly being picked on by a distinct group of kids, you don’t get the sense that he’s nearly as big of an outcast as Billy was. So when Billy gets the power to LASERBLAST anything he wants to, he immediately turns it vengefully towards those that wronged him. Ralph, a lover of superhero comic books, is instead more inclined to fight for justice. Ralph also never had to deal with the necklace that corrupted Billy’s mind, but even taking this into account Billy is a much darker soul than Ralph.

So it makes sense that Ralph didn’t go totally batshit and start LASERBLASTING everything in sight. I have to admit, it was quite sad for me to realize there would be no more LASERBLASTS (I howled like a three-year-old who just had his favorite toy ripped from his arms), but I guess the film was trying to teach me the valuable lesson that too much of a good thing can be detrimental. You know… if I didn’t already learn that from the original film (which I clearly didn’t).

In the end, Alien Arsenal actually does a great job remaking Laserblast into something that’s more plot-driven and coherent. Laserblast is more like the arthouse version of the story, where you are left to extract meaning and understanding from the minutes of dialogue-free driving and jumping around in the desert. Anyway, Alien Arsenal is a bunch of dumb fun with quite a few good explosions sprinkled around its runtime. It’s also a Moonbeam film so it’s perfect for the whole family! LASERBLAST!

Next time I get around to a Full Moon movie, I’ll be going with the most modern Full Moon I haven’t seen: Charles Band’s 2004 film Dr. Moreau’s House of Pain! See ya then!