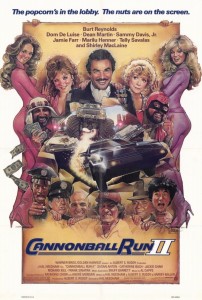 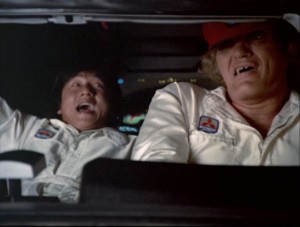 Director Hal Needham, stuntman extraordinaire, definitely succeeds in packing his film with all kinds of crazy shit, but there’s nothing more sad than a boring, unfunny comedy. Cannonball Run II didn’t click with me at all; I probably only laughed two or three times. What kept it from being even worse were the fun cameos from people like Don Knotts & Tim Conway, Jim Nabors and George Lindsey (Yes, I love The Andy Griffith Show), and I was oddly enthralled by the atrocity of the “sinking ship,” but perhaps “burning car” is more appropriate here.

As I alluded to earlier, I watched Cannonball Run II as a part of my Jackie Chan series. His part here feels even smaller than it was in the first film. He has a couple of quick fights, but they’re nothing special. At least they aren’t over-edited and shot in close-up like they would be now. Anyway, they got rid of his partner played by Michael Hui and replaced him with Richard Kiel (AKA Jaws from the James Bond films). They also made Jackie the backseat gadget operator instead of the driver, and without any English dialogue, this makes him something of a Chinese Chewbacca in this one. Is it wrong of me to take all of this as subliminal racism? Like if there’s a white guy in the car, he’s going to drive even if Jackie has the precedent established from the first film that he’s a great driver? 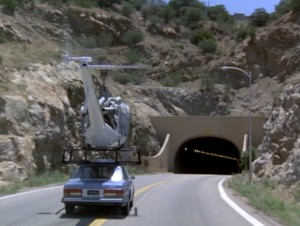 Not to mention that Jackie plays a Japanese guy (because in Hollywood all Asians are the same), but he still speaks Chinese. Then there’s the bartender that can’t understand Jackie, and he asks, “Anyone around here speak Oriental?” and then goes to get Jackie a sake. Cannonball Run II was a Golden Harvest co-production, you’d think they could have exerted some influence on the film to pay more respect to Asians. I shouldn’t get too frustrated, though. The Italians in the film all have pasta-based last names, and the Sheik’s family name is Falafel.

Probably the funniest thing about the movie is that despite being about a cross-country race, some huge amount of the movie, like roughly 70% or more, is shot around the same area of desert. They didn’t even bother to shoot it differently or anything; the same mountain is in the background of half the movie. First you see the mountain behind one set, and then in another scene it’s basically the same angle but now there’s another set there in front of the same mountain. They probably built everything side by side and shot the film with as little traveling as possible.