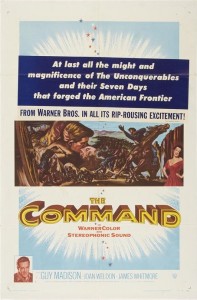 As much as I tried not to, I found it nearly impossible to watch this movie without being extremely turned off by the depiction of the Indians. I expect to find 1950s Native Americans to be savages, but at times The Command goes a step beyond this. In one scene, the Natives come upon an old campsite where the white men have left many things behind (trashing up the place as only Western civilization can). One man finds a child’s Indian Squaw doll and he giggles with glee and shows it to his buddies. Another Native jumps on a rocking chair and rocks with the joyous smile of a three-year-old without boundaries. Then the cavalry pops up and starts blasting them, and the most bombastic, triumphant music scores the scene, giving it all a patriotic feel. We’re expected to laugh at these “stupid savages,” and then revel in their slaughter. Again, bitching about things like this in a ’50s movie isn’t a great use of time because “It was the times,” but that doesn’t mean we can’t learn something from it (not that I’m teaching anything here).

Besides, to consider the Native Americans in The Command simply by these depictions is naive. They are given another layer in the film via a sub-plot about a possible outbreak of smallpox among the civilians of the wagon train. Our hero does what he can to stop its spread without revealing his true profession to the civilians or the infantrymen, but his true concern is that the Natives will pick up the disease, and because they have no immunity will all perish from it.

This small thread that runs through the story is where I feel the influence of Sam Fuller. He originally adapted the story from a Saturday Evening Post serial called The White Invader by James Warner Bellah. The original title suggests that the story may have been even more focused on this small sub-plot. The serial was later collected and published as the novel Rear Guard, a decidedly more militaristic, “patriotic” title. Fuller doesn’t mention The Command in his memoir, but I have a feeling his version leaned more towards the sympathetic irony of a new commander who must kill the Indians with strategy and bullets while not murdering them with Western diseases. It is also interesting to note that the earlier, much more famous cavalry films Fort Apache, She Wore a Yellow Ribbon, and Rio Grande (all directed by John Ford) were also based on the stories of James Warner Bellah.

I remained somewhat perturbed, indifferent and bored throughout much of The Command, even the action sequences… until the finale. The Doc comes up with a plan to overcome the huge raiding party of Indians that have stalked the Army caravan throughout the film. The Doc has read the late cavalry commander’s book on tactics, but this plan is a daring move that the Doctor devised himself, so if it fails he’ll be completely to blame for the deaths of those that trusted him. It all comes together in a thrilling action sequence, brought to vivid life with gorgeous location shooting, a nice widescreen image (The Command was Warner’s first CinemaScope picture, too), and a whole lot of arrows and running horses and covered wagons. It’s a fantastically mounted finale, one that makes me wish the whole movie was produced and directed with such gusto. If you’re a fan of classic Westerns, The Command is an interesting one, but not especially great. I’d still cautiously recommend it to fans of cavalry films, though.

No trailer to be found, but here’s a clip of the film smashed into 4:3 ratio. Nothing but the best!