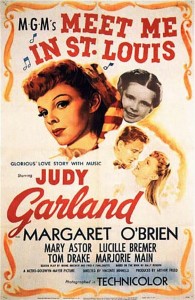 Still unkissed at the end of the party, 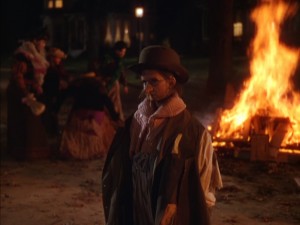 Esther attempts to set the mood by inviting John to help her turn out the house’s lights. She claims to be afraid of mice, and he gentlemanly obliges, but we all know the real reason. As they go from room to room, turning off the gas lights as they go, Esther is nearly shaking in the anticipation of being in his arms, but John isn’t on the same wavelength. He’s just focused on the task at hand, and is oblivious to the not-so-subtle advances of Esther. When her perfume only recalls his grandmother, the night is officially ruined. It’s a fantastic scene brimming with the electricity of blossoming infatuation, all built around something that all of us take completely for granted in this modern age. The slow care that must go into something we think of as mundane is both quaint and thought-provoking, reminding us that in our modern hurry we often leave little time for quiet moments such as this to develop.

Another scene interesting to us future-dwellers, is the one that occurs on Halloween night 1903. The film depicts a Halloween traditional that was apparently common at the time: ringing the doorbell and throwing flour into the face of someone you didn’t like. The kids also start a fairly large bonfire in the middle of the street, cheering while they congratulate each other on their “kills” and throw random junk onto the fire. This was all completely new to me, and is considerably darker than our current traditions, to say the least. Most of the scene has little to do with the film’s plot but it’s the kind of thing that gives us a great window into the past, as many of the people making the film had likely experienced this tradition first-hand. Anyone with even a cursory interest in Halloween should find the scene quite engaging. It’s also some of the most perfectly filmed, atmospheric Halloween night footage I think I’ve ever seen in a movie. Really fantastic stuff. 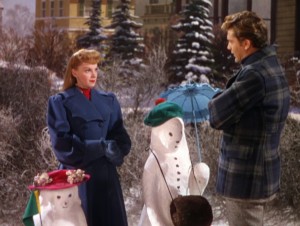 The overall plot is one of love, but it is rather meandering and fickle. Instead of a traditional love story, Meet Me in St. Louis is more a slice-of-life musical about an entire family, with certain members receiving more important screen time than others. In this way, the plot itself also reflects one of the film’s major themes: the importance of family over all, whether that’s money, a lucrative career or the boy of the moment. No matter what’s going on in Esther or Rose’s love life, their familial love is always front and center. The upcoming World’s Fair helps bring the lesson forward even more. It’s an arguably superfluous scene, but it shows the potential of life when you double down on family. We aren’t all in a place to visit a World’s Fair after we make life-changing decisions, but we can look forward to the future with hope at the potential over the horizon. Instead of chasing after a place where the grass is supposedly greener, we can focus on making the grass where we are grow as green as grass ever was. As humans we are amazingly resilient, and this ability is made all the stronger by a deep set of roots in a solid foundation (like family, church, or whatever you find true stability in).

Meet Me in St. Louis has been built up for me over the years, and while I found it quite entertaining and charming, I was a little let down. For its time, it’s a stunningly well-produced film, with exceptional Technicolor cinematography and some truly impressive camera work. For instance, there’s an incredible shot that begins outside and smoothly moves through a window and then around a room. Things like this are commonplace now, with digital effects, but in 1944 it must have been a true logistical feat to achieve this, especially without even the hint of a hiccup. Consequently, it’s a much more impressive shot here! So in my love of certain aspects of the film I think my disappointment is somewhat unfair. A movie can rarely live up to the unrealistic hype that only exists in your head, and a film as charming and beautiful as Meet Me in St. Louis should merely be appreciated and loved for what it is.

Meet Me in St. Louis is the final part of my 2014 Blind Spot Series where I see one movie a month that I feel I should’ve seen a long time ago. It’s all the brainchild of Ryan McNeil over at The Matinee, one of the web’s premiere film blogs. Head over there tomorrow where he’ll have a post of his own for the series, as well as links to all the other people taking part in the series. And feel free to participate on your own blog as well!

Next month: There won’t be a next month! I’m shelving the Blind Spot series for now (read: 2015), so that I can focus on real life and my other already-in-progress series that continue to stretch far beyond the dates I initially intended them to end by. There won’t necessarily be a lack of classic film content here, though, as a fair majority of what I watch could fall into a Blind Spots category. Thanks for reading!