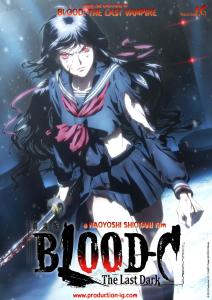 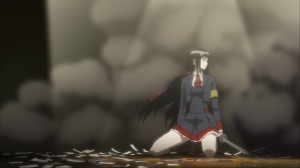 What is more surprising is that Saya’s nature as a vampire is barely even mentioned. If it weren’t for the fact that I have seen most of the previous versions of the series, I would have had no idea what makes Saya so badass. This is at least somewhat justifiable, though, as this is a sequel to the series that already gave all the explanations of who and what Saya is.

This film blends aspects of the previous incarnations of Saya. As with the other two films, Saya is a brooding killer, wearing the same school uniform that has been her iconic costume since the original film. But it also draws from the TV series concept (from both Blood C and its predecessor reboot Blood+) of Saya as a typical, happy teenage girl who finds out that she’s actually a vampire who lost her memories. As a sequel to the TV series, though, The Last Dark keeps Saya’s cheerful past mostly in the background and portrays her as the antisocial angry lunatic that she became later. She’s out for vengeance against all the crap that happened to her in the series, and now she’s on the hunt for Fumito, who had been using her all along.

As Saya’s quest takes her to Tokyo, she runs into a gang of meddling kids. And just like the gang of Scooby Doo, these kids are trying to unravel the mysteries of all the crazy monster sightings going on around town. The kids are mostly computer hackers, and they help out Saya by finding out where Fumito is hanging out.

The action itself is pretty decent. It’s nothing that stands out as fantastic, but it gets the job done well enough. Somehow it just lacks a sense of urgency, which keeps it from being all that memorable. The film as a whole can get a little slow at times, too. Much of the plot revolves around one of those teen hackers named Mana who desperately wants to be Saya’s best friend, so there are a lot of scenes of the two girls bonding, which mostly consists of Mana trying awkwardly to engage in conversation despite Saya’s strong silent schtick. These scenes were a tad bit over done, and kinda reached the point of giving off a lesbian vibe. 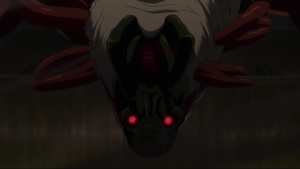 What I found to be more annoying, though, was all the CG. The cars I could handle, despite disliking them. The background crowds of people was sad, but understandable. But when the biggest, nastiest monster of the film shows up, in full unimpressive CG, I was highly disappointed. It’s nice that CG in anime has improved lately, but I really just don’t care for it. Even at its best it doesn’t mesh well with the standard animation, and this film didn’t even try. There had been several other nasty monsters earlier, and all of them had looked great, so what possessed them to make the final one look like crap I can’t imagine.

Though clearly weaker than the original film, The Last Dark still has its moments. These moments are rather balanced out by the bad CG, but that still leaves a film that is on the whole a middle-of-the-road affair. It’s fun, but not enough fun to make it a must see.