> Reviews by Author > Syreeta's Reviews > Jonesing For Some Of That 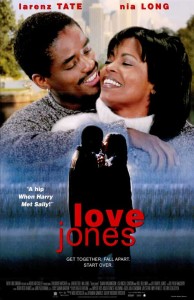 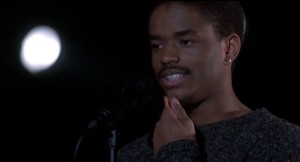 The first sexy scene happens when Darius meets Nina at the bar while ordering drinks. The scene is hypnotic: the music, the conversation, the beautiful people, and the instant attraction between Nina and Darius.  The chemistry makes you feel embarrassed watching them. Their subtle body language, the nervousness, the blatant flirting, and teasing; it’s all very overwhelming to my senses. Because LJ was in the ’90s, even Darius’s small hoop earring and smoking of a cigarette looks sexy. During Nina and Darius’s dialogue, their friends are at their tables commentating on what they think is happening. Darius fumbles because of his nervousness but decides to redeem himself by getting on the mic and seductively reciting a poem retitled, “A Blues for Nina.” He looks out in the crowd and says, “I am the Blues in your left thigh, trying to become the funk in your right. Who am I? I’ll be whoever you say.” …sexy. 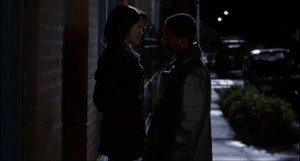 Because of Nina’s recent breakup, she is reluctant to go out with Darius. After a chance encounter at the record store, Darius shows up at Nina’s apartment unannounced and convinces her to go out with him. Put on your helmet, this is where the story moves fast. The story goes through the typical woes of falling in love. Nina is an up-and-coming photographer. Darius is a writer who has saved enough money to take a year off work to finish his first novel. As per Nina, the “timing is bad,” but they go for it anyway. They go out on their first date, and they have sex too soon — causing confusion and insecurities early on. Then Nina plays games to see if Darius cares. It is because of the game playing that Nina goes to New York to get closure with her ex-fiancé, while Darius is left feeling the loss of her. It is with many misunderstandings that Nina and Darius break up a couple of times, move to different cities, Darius finishes his book, and Nina lands an amazing job in New York. Although life still goes on, they are still craving the love that was created when they were together. There are very intimate scenes of them falling in love. 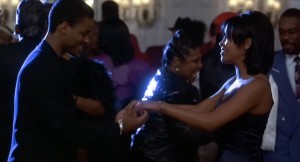 Throughout their courtship we are exposed to Chicago’s urban lifestyle and ’90s culture. I am nostalgic when Darius sees Nina at a record store. I am reminded of when I use to go into a record store and play music. There are also other obvious ’90s culture reminders such as house phones (not cell phones), typewriters (not iPads or computers), pagers, smoking in lounges (other than Vegas), taking pictures with a camera (not iPhone), and loose-fitting jeans (that’s right… not skinny jeans). We are also exposed to a popular Chicago dance style — Steppin’. Steppin’ is a very popular dance form similar to swing dance. One of the reasons why black films are important to me is because of the exposure to black culture outside of California. These films give us a rare glimpse into middle class urban areas, where black intellects and professional are the norm and not the exception.

Love Jones is a perfect romantic film. It has a great love story, believable characters and plot, and it connects the viewers regardless of color.

Listen to: Hopeless by Dionne Farris

Grind to: Sumthin’ Sumthin’ by Maxwell

Try: The Oralgasm Showcase in LA

Writing was my first best friend. In high school I met another one of my best friends and writing partner, Yawo Watts. Everyday we would sit by the lockers writing poetry and songs. Yawo is now a poet and published author of Lemongrass. He hosts a poetry showcase called the Oralgasm. He and his business partner, Reese, put together a sexy, eclectic mix of artists. The night is filled with erotic poetry, music, sexy prizes, a naughty table, sexy snacks, and a night guaranteed to wet your panties or tighten your zipper. In honor of the poetry showcased in LJ, I have included a poem that I wrote to showcase at the next Oralgasm. The title is inspired by my sister from a different mister, Barbara. She says that if all else fails, “Fuck it out.”

Why can’t we just f*** it out?
I need to be cleansed of this craving of you
I need to release it through an orgasm
Created by you
Kiss me
On my lips
I want to feel you
Come close enough for me to feel your breath on my face
Stick your tongue out I’ll meet you half way
Umm, You taste good in my mouth
If we’re going to f*** it out
Look at me
I’m not laying on my back
Pleeeaaase, let’s f*** it out
I want to feel every inch of you
Sliding into to me
Fill me to the hilt
Stretch me
I don’t want to hurt
I just want to feel full
Ummm…f*** it out
Open your eyes
I want you to see this ride
It sounds pretty for us to copulate…BUT
we just need to f*** it out

So now it’s your turn! Enter our poetry contest by bringing out your “inner nasty.” Take the title of my poem above and create your own written word. There is no min or max word count. Just make Will and I pant. Use your imagination and let the title consume you. Post it in the comments below and the person who gets the most replies with the word “ummm,” will win something you can use on your next romantic night out!

7 thoughts on “Jonesing For Some Of That”