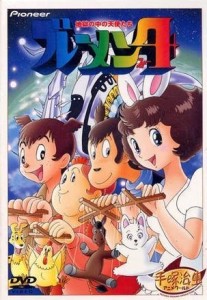 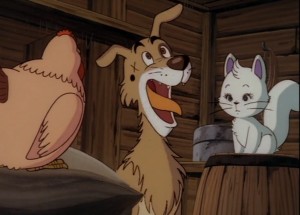 This somber tone is at odds with the cheerful sense of adventure that also permeates the film. On the whole, it’s not a depressing movie at all. It’s quite upbeat and playful for the most part. I’ve gotten used to the sudden, some might say jarring, shifts that populate Tezuka’s stories, but here it stands out a little more than usual. In one particular moment of curiously mixed tone, a character is executed by firing squad and his body deflates like a balloon. This odd mixture of tragedy and goofiness left me rather perplexed.

The story follows the adventures of a cat, dog, donkey, and hen that team up after being displaced by an invading army of futuristic soldiers with weird sci-fi tanks. They set off on a quest to find the cat’s owner, a boy who got washed down a river during the invasion. On their way, they encounter an alien that charges them with the mission to spread peace across the world, and then gives them devices that turn them into humans. However, now the animals need to earn money to buy food, so they try to find jobs, eventually becoming a musical group with rock-star status across the land. Well, as much as you can imagine a flute, a trombone, and a clarinet being used by a rock band. That sure doesn’t stop them from wearing face paint reminiscent of KISS during a rocking concert surrounded by backup dancers. 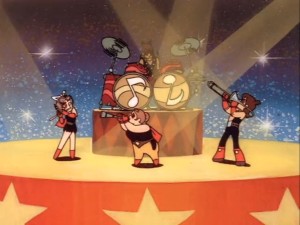 In summary, this all sounds pretty random. I did mention that Tezuka’s tone shifts can be jarring, didn’t I? But the film does a good job of setting all this up in a way that flows much better than one simple paragraph can make it sound. Well, maybe not that rock concert. That thing came totally out of left field, and I mean that in the best way possible.

The anti-war message is pretty obvious here, but unlike the previous film, Fumoon, I didn’t feel like it applied the message with a sledgehammer. Instead, Bremen 4 offers a fun and charming romp through a futuristic yet old-fashioned fairy tale land, while still taking the themes of war orphans and harsh dictators seriously. It’s certainly a rather odd mixture that might turn some people off, but that is probably the most defining aspect of Tezuka’s stories. I, at least, had a blast with it.

As with the previous 24 Hour specials, Bremen 4 can be found on Anime Sols if you want to check it out.