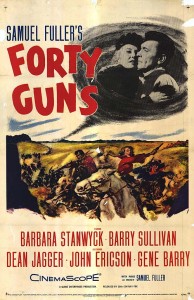 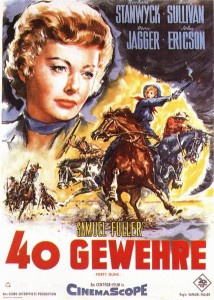 In his book, A Third Face (which all classic film fans should get their hands on), Sam Fuller talks about the overarching theme of Forty Guns being juvenile delinquency and how we need to teach kids about the proper use of guns and how to be good adults. There’s definitely a lot to mine there in Forty Guns. The character of Brockie is our juvenile delinquent, allowed to run amok in the town. He’s so brazen that he kills the Town Marshall, laughs it off and then destroys the town along with his cronies. He is influenced by the hard-nosed lifestyle of his sister Jessica, and while she’s a much better adult than he is, her soft spot for him allows him to be this way. He needs someone to whip him into shape, but she’s not the one to do it.

Griff, on the other hand, is, and he does just that to end the drunken tirade around the town. In one of the film’s best scenes, Griff strides confidently up to Brockie, who holds a gun on him. Faced with someone who stands up to him, and doesn’t cower in fear or coddle him, he’s transfixed and Griff is able to walk right up to him and clock him upside the head with the butt of his pistol. This leads to some hope that Brockie will “wake up” and become a better person, but that kind of stuff just doesn’t happen overnight. Instead he lashes out, leading the film along a dark path of murder and deceit.

Griff also represents a good role model, as his brothers that accompany him are equal model citizens. His youngest brother Chico is probably about the same age as Brockie, but his upbringing crafted him into a much different character. Griff consistently refuses his requests to become a gunslinger, insisting that he returns home and starts up a farm. But boys will be boys, I guess, and Chico’s desires just can’t be quelled by careful words and gentle nudging. These plotlines and themes all converge during the finale of the film, in what is a rather thrilling and very unique final duel. Fuller’s original ending (as related in A Third Face) would have been incredible and overwhelmingly dark, but the studios fought him on it tooth and nail until we ended up with the slightly more optimistic ending. This filmed ending ultimately works (Fuller himself compromised, it’s not a tacked-on ending by the studio), but if the studio had allowed the true ending to stand, Forty Guns might be a lot more well-known nowadays than it is. Especially after seeing the incredible, independently produced Run of the Arrow, Fuller’s return to studio pictures feels constrictive and less than it could have been. After working through some of these themes and plotlines, I definitely like Forty Guns more than I did while watching it. I had a feeling that might happen, and I imagine re-watching the film with this knowledge will reinforce this even more. 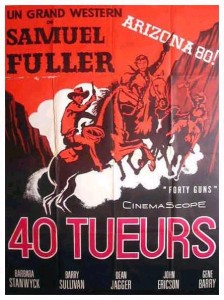 One thing that didn’t change was my love for the cinematography. Right from the first frame, it’s clear Forty Guns is going to be beautifully shot film and it never disappoints. You don’t see a lot of black & white CinemaScope films (or at least I don’t!) so I was consistently taken aback by how gorgeous the combination of B&W cinematography and the widescreen composition was. Forty Guns just looks stunning. And being in B&W means that the noir-ish undertones to the story are amplified greatly in the visuals, as characters are often shrouded in deep, black shadows.

And even though I was kind of lost during the film, that didn’t diminish my ability to be amazed at some truly enthralling moments sprinkled throughout. My favorite (besides the end duel) is how Fuller shows us the failing eyesight of the Town Marshall. Instead of simply stating that his eyesight is poor, every time we’re looking at something from the Marshall’s perspective, we see a blurry, unfocused image. It feels like something well ahead of its time, and it punctuates the scenes it shows up in very well.

So I wasn’t quite as taken by Forty Guns as I expected myself to be, but for the third film released in 1957 by Sam Fuller, I have to cut him some slack. Most people couldn’t make one movie in a year’s time, and he made three, two of which are outstanding. But writing the review and reading Fuller’s chapter on the making of the film definitely gave me some extra insight into the film, and I look forward to re-watching it at some indiscriminate point in the future. I definitely wouldn’t recommend this as a starting point for Sam Fuller, but if you’re in the mood for a completely atypical western then Forty Guns is a good choice.