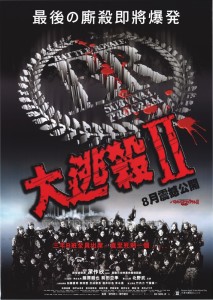 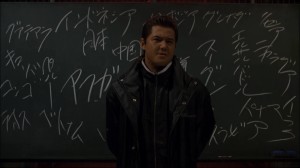 And at the outset of the film, that’s what it seems like we’re getting. There’s another school bus trip scene, followed by the kids being led into a classroom of sorts for an adult to give them a quick rundown of the rules. But after the finale of Battle Royale, our hero Shuya became a domestic terrorist, blowing up buildings and taking out his anger and frustration on the adults who passed the BR act. In one of his video communiques he says that he wants a war with the adults, so the adults oblige him and pass The Millennium Anti-Terrorism Act AKA: BRII. In a nutshell, this makes it so that the random class of kids aren’t fighting each other, they’re all on a mission to kill Shuya. So imagine Battle Royale with just about everything that made Battle Royale controversial and great stripped away. Oh, and the kids are now in pairs, so if one dies the other’s collar explodes soon after.

But at this point, I was still on-board. OK, whatever, it’s not a real Battle Royale. I can dig it. But then they send the kids to assault the island in jet boats, and what follows is a poor rip-off of the Normandy invasion from Saving Private Ryan. The same shaky handheld, the same dropped frames to make it look kinetic, but none of the same emotion or artistry. By the end of this sequence about half of the class is dead, and if you’re thinking that this might have been a contrived way to reduce the number of characters, then you’re absolutely right! And this is only one of many plot contrivances in Battle Royale II.

Also, don’t be fooled if you see this film listed as “Directed by Kinji Fukusaka and Kenta Fukasaka.” This was done only to lend the film some credence that it should never have. Originally it was to be Kinji Fukusaka’s next film after Battle Royale, but he died of cancer right after the shooting began. He apparently only shot one scene with Takeshi Kitano (his only scene in the film) before he passed, so even if Kenta followed his father’s storyboards exactly, it’s still disingenuous to call this a Kinji Fukusaka film. Nope, this is the directorial début of Kenta Fukusaka, and it feels like it. Where Battle Royale was the final film of a director with a successful 40-year career, Battle Royale II feels like a first film. Even using the same script, I can’t imagine that Kinji Fukusaka would’ve delivered a film as patently bad as this. 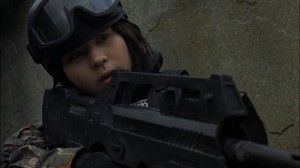 Even with the fundamental change to the Battle Royale event, the first hour of the film does carry some tension as the number of kids dwindles and we’re wondering how it will all come together. This question is answered when the kids encounter Shuya at about the hour mark, and it’s also at this point that every bit of tension or weight is completely sucked out of the movie. It just descends into more mindless action after this, and it’s not good action, it’s incredibly overlong and disappointing action. Ugh. Battle Royale II just gets worse and worse with every passing minute.

The tone is also far from the heightened reality of Battle Royale, everything is now campy and completely over the top. There were slight comic book elements in Battle Royale, but they were kept at the outer fringes, only there to add some color and to spice up the proceedings a bit. This worked perfectly, but in the sequel everything is turned up to the max and isn’t believable past the first couple of minutes. The violence is largely just big blasts of CG blood amidst general war gunfire, so even the inventive violence of the original is completely obliterated.

The original film was so controversial that it only recently received a US release, over a decade after its initial release. They included a copy of Battle Royale II in that US DVD release for two reasons. First, they knew no one would buy it willingly, and secondly I think even the businessmen felt bad about asking the public to shell out extra money for it. Just don’t watch Battle Royale II: Requiem. It’s awful.