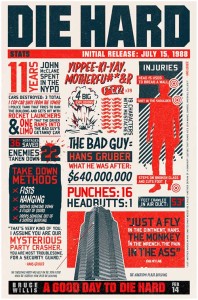 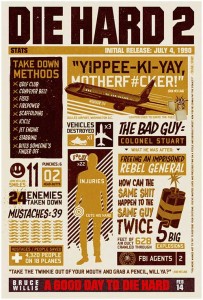 The latest film in the Die Hard series, A Good Day to Die Hard, is the number one film in the country! In order to celebrate, we’re giving away 4 infographic posters featuring all kinds of neato facts about the first four films in the series. The posters for Die Hard and Die Hard 2 are on display up above (click for a closer look), and the lucky winner will win those and ones just like them for Die Hard With a Vengeance and Live Free or Die Hard! The posters are courtesy of our friends at 20th Century Fox, and when you win them you’ll be able to boast about it to your friends by saying, “Now I have 4 Die Hard info-graphic posters! Ho ho ho!”

And how might you enter said giveaway? The four ways to enter are:

All the entries are tracked via the Rafflecopter app below, so make sure you do it all through there or it won’t count! Also: US only, sorry International friends! 18+ only, as well.

This post brought to you in partnership with 20th Century Fox Fan Network Powered by SocialChorus. #DieHard #Spon