> Reviews by Author > Syreeta's Reviews > Mammas don’t let your boys grow up to be Urban Cowboys! 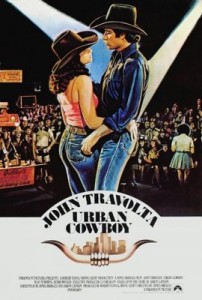 Urban Cowboy has a great soundtrack. One of the best songs is Mammas Don’t Let Your Babies Grow Up to Be Cowboys (#2). I believe they meant “Urban Cowboys.” These boys did not know how to treat their ladies. This movie exposed intense scenes of domestic violence. Unfortunately, Travolta is the airhead friend and douche bag (#9, 6). Throughout the movie he displays his sexism and abuse for woman. It’s delivered with his incoherent rambling and uneducated conversations (but he has a nice ass). The physical violence started between Bud and Sissy after their first date. They slapped each other while dining with friends. This scene was the root of their relationship. Bud seems to be in competition with Sissy. He believed that there were things that men did, and things that woman did, and her riding the bull at the bar was one of the no-noes. I don’t think that Bud got the memo on Cowboys. To answer Sissy’s question: “No, he’s not a real Cowboy…yet.” Despite the constant bickering, they got hitched (third date is the wedding). He purchases a trailer for a wedding gift, but kicks her out of it after a fight (first month of marriage).

Sissy and Bud break up and start playing games to make each other jealous. They engage in a tug of war on who can one-up the other. There is plenty of smoking, drinking, screwing, and bull riding. Bud starts screwing — I mean dating Pam, played by Madolyn Smith, and Sissy starts dating Wes, played by Scott Glenn. Pam’s goal is to make her rich Daddy mad by screwing a cowboy. Wes is an ex-convict who shows-up to show-out at the Honky Tonk. Bud’s balls immediately swell with testosterone. Not only does Wes ride the bull without flaw, Wes is also attracted to Winger. The first time Wes rode the bull, I felt dirty. He smoothly jumped on the bull (with his see-through shirt on), and his triceps bulged out. Let’s NEVER forget the way he stuck his hand in his tight-ass jeans and adjusted his balls to ride the bull. I got a lady boner just watching. Wes is gritty and sweaty, but damn he is slummy-sexy. He reminds of my secret Kid Rock crush. Back to the story… Sissy moves in Wes’s trailer that is in the parking lot of the Honky Tonk and the two engage in some hot sex, domestic violence, and dirty dancing. Wes makes it a point to teach Sissy how to ride the bull.

Winger made us ladies proud when she decided to learn how to ride the bull, despite what Bud told her. Winger riding the bull is one of the most iconic scenes, references, and memorable things about the movie. She rode the bull in slow motion; it was so damn seductive and suggestive. She started off lying down and then grinded her way into a standing position. Shit, she deserves a standing ovation. Get up and start clapping because 33 years later, I’m still impressed and striving to reach that level of sexiness!

The movie comes to an end when Bud “teaches Sissy a lesson” by riding the bull better than her new man, and after an accident involving Uncle Bob. It is important to mention Uncle Bob’s quiet importance. Uncle Bob not only taught Bud how to ride a mechanical bull, he also shows Bud how to be a better man. Bob takes Bud under his wing and gives him a lesson on how a man should act. Most of those lessons are delivered by example. It is the time spent with his uncle that Bud learns the lesson of becoming a man. Unfortunately, Wes beats Sissy’s ass (again) and robs the bar. This pivotal moment makes Bud finally Cowboy Up! He kicks Wes’s ass for beating up Sissy and takes his woman back. Bud becomes a bona-fide cowboy after he becomes a gentleman.

Urban Cowboy did not get a full ten because it was made in 1980; this is right before the invasion of bad hair and bright clothes. The movie did not have bitchin’ colors. It was dull in colors, but vibrant in country sexy. The fashion did not show popular ’80s fashion, however, people did go out and buy some new boots and hats (#4). There is minimal male nekkidness (per Will). I did appreciate Bud’s naked leg after riding the bull. He is lying on the bed, rubbing his sore balls. He has a hairy chest and a partially covered body. I kept waiting for the covers to move an inch, but… it never happened. The movie is full of sexy and sex, but unfortunately we have to use our imaginations. If you want sex scenes with Debra Winger go see An Officer and a Gentleman (which is one of my top ten movies).

Eighties movies are for the fun, not the party poopers! If all else fails, remember that these ’80s movies are a small glimpse into a very unique time. Here we are in 2013 and people are constantly remaking ’80s movies and music. Facebook, Pinterest, and Twitter are the social scene, but in the ’80s people picked up phones to talk, met at the mall to “hang,” skated at the roller rink for fun, or hooked up with friends to listen to new albums or tape cassettes. I hope you enjoyed our short diversion for Valentine’s Day. There are many things that I did not enjoy about the ’80s, like sexism and political incorrectness. But, I loved the joy of the colors, the power of the music, and the sexiness of the films!

My last challenge: If you were inspired by Debra Winger, go find yourself a mechanical bull. I’m having a contest with a couple of co-workers. We are going to Saddle Ranch to see who can ride the bull the sexiest and the longest. All I have to say is “Jaide and Melinda are going down!”

P.S.
There are a few things to remember about our STEAMY Valentine’s Special:

One thought on “Mammas don’t let your boys grow up to be Urban Cowboys!”