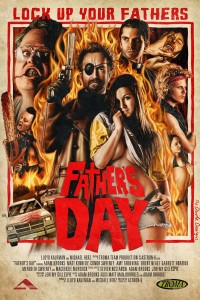 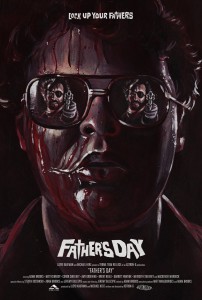 The problem with this approach, like most movies that hope to get by on quantity, is that there’s such a lack of overall focus the entire movie feels more like a distorted puzzle than a real narrative. While there’s something to be said for an exploitation movie that contains what is essentially wall-to-wall trashy thrills, I still think it would have been better to make a film that serves a story as opposed to a shitload of thrills that solely serve primal pleasures. In this way, Father’s Day never felt like an actual film to me, it felt like all those other modern exploitation films that set out to actively make a bad movie. Seemingly everyone has forgotten that the truly great bad movies (Troll 2, Samurai Cop, Plan 9 from Outer Space, etc.) were made by people who sank their hearts and souls into their films, and truly believed they were doing great work. You simply can’t set out to make a bad movie (or an artful movie for that matter), it must come together naturally.

The film was directed by the five-guy artistic collective, Astron-6. They have a cool name, and they pepper the film with even cooler, retro-styled TV bumpers and commercials, but cool only gets you so far. The guys also make up a large part of the cast, the music team, and one of the five is the chief FX artist. If nothing else, they’re very ambitious, and just the fact that Father’s Day is what it is on a $10,000 budget is absolutely incredible. Whatever I feel about the end product, it is damn impressive from a production standpoint.

As I hinted at above, instead of a real story arc that works throughout the film and comes to a natural conclusion, it feels much more episodic. So without anything concrete tying everything together (other than “We gotta get that asshole!”), I found myself drifting off and doing some mental wandering… in other words, I was bored. Yes, in a movie with a guy that graphically chews another man’s dick off, I was bored. The pacing is fucking horrible, with things just starting to take off around the 45 minute mark. Did it really need to take that long to get all the pieces in place, or is it that there were just too many beloved scenes of exploitation to throw in because they seemed fun? This is where the film really feels unscripted, and it’s probably the biggest issue with Father’s Day as a movie. It’s totally possible to enjoy the shit out of this movie if you’re in the right frame of mind, but I hope that the Astron-6 guys improve their storytelling the next time around. 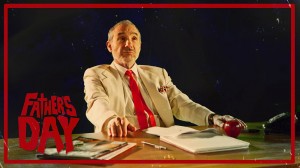 The movie isn’t a complete wash, though, as it has so much going on that it would be hard to walk away from this one without at least one moment engrained in your mind for the rest of your life. The penis trauma here is unparalleled, and I defy any man watching not to squirm when the killer gets a little over zealous with the masochism. There’s also the absolutely pitch-perfect TV bumpers and fake trailer that color the film as a late-night time travel back to television of the ’80s. I wish the movie lived up to the promise in these moments, and it makes me wonder if perhaps the DVD full of Astron-6’s shorts wouldn’t be a better evening’s entertainment. Their style feels too drawn out over the feature-length, and I think I could stomach it all better in small doses.

But honestly, there’s actually far less gore than I expected there to be, but what’s here is incredibly graphic and grotesque. Never before has a Troma head-crushing been as brutal and realistic as it is here, and the shotgun blast to the balls that precedes it looked so good I’m sure someone’s mid-lawsuit this very moment. The final act of the film contains the film’s most ambitious FX work, and as a fan of low-budget ingenuity I could only marvel at how great everything looked. Mixing stop-motion, practical FX and live actors into one shot seamlessly creates a unique visual experience that I definitely won’t forget. I just can’t get over how much stuff was crammed into this movie on only a $10,000 budget.

Overall, I can’t say that I liked Father’s Day, but I can respect it for pulling off one of the most ambitious and imaginative B-Movies I’ve seen in a while. I wish it were better, but judging from the very enthusiastic response from nearly everyone else that I’ve heard talking about it, I’m in the minority. I think the key is that I didn’t find it all that funny, but if you’re able to lock in with the humor, I think you’d have a blast with this one. I had hoped that Father’s Day would be a genre revolution, shepherding in a new generation of Troma and of great B-Movies, but I guess I’ll have to wait for that. Maybe Astron-6’s next film, Manborg, will fit the bill. I’ll definitely be checking it out when I can.