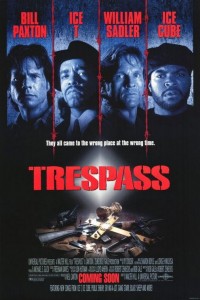 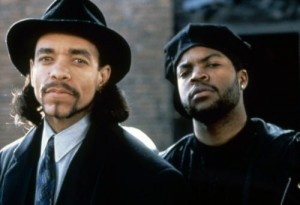 Trespass is an interesting film, structured similarly to a horror film where Paxton and Sadler are stuck in the building, forced to do whatever they can to stay alive and hopefully escape. The interesting thing here is that there’s a great ambiguity to the writing that allows the viewer to side on either side of the struggle. Even the title reminds you that these characters, who would normally be the ones we’re rooting for, are in the wrong. Sadler is an absolute lunatic, ready and willing to fuck over anyone that gets in his way. His acting is incredible, but damn is he an asshole in this. Paxton is more laid back and passive, apprehensively following Sadler’s lead, even if his conscience tells him it’s a shit idea. These are supposed to be our heroes, but their opponents are the ones portrayed as being much more level-headed and reasonable.

Well, that’s not entirely true. Ice Cube wants to burn the building down fairly early on, but Ice T is the voice of reason. As the trespassers hold an important hostage very dear to Ice T, he just wants to make sure that the situation ends in a way where his interests are met satisfactorily. This is definitely the best performance from Ice T in the series as well, allowing him scenes that show his ability to be badass, suave, and tender… but not all at once. He also looks fly as a motherfucker, evoking a Prince vibe with his flowing long hair and perfectly manicured goatee.

I’ve talked a lot about the characters and the way the film is structured, and I attribute those strengths to the script from none other than daring duo Bob Gale and Robert Zemeckis. This was one of their early scripts (supposedly written before Back to the Future), and it’s a good’un. It’s definitely not to the level of their later work (which came out much earlier than this), but it’s solid. For a fairly simple crime thriller, this could have easily just been a bunch of random events strung together by some gun fights, and while I won’t lie and say that Trespass is much beyond that, the quality writing elevates it beyond the relatively simple premise. 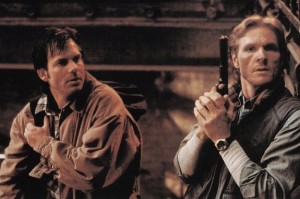 Trespass also marks the fourth film of Ice Fest to feature a score written by an artist generally known for their albums and not their film scoring work. I wonder if the percentage of this is higher in film where musical artists are the stars, or if I just coincidentally picked the movies that had it. This film features the work of noted guitarist Ry Cooder, who delivers a score that evokes free jazz for the most part, but at times also incorporates elements of dissonant, furious rock (such as the main title theme). Cooder has always been hit or miss with me, but his work here perfect matches the intense mood of the film. At times the music is so good that if you’re wrapped up in the specifics of the action, you won’t even notice it and what it’s doing to your heart rate. There were at least a couple of moments when this happened, and for someone like me to completely lose himself in a scene takes a lot, so I count it as a supreme compliment.

Where Trespass does lose a little steam is its length. For the most part it’s exciting, but because it’s an almost constant stream of tension and yelling, it gets exhausting. Part of this could be that I started the movie late so I would have been exhausted anyway, but as I’m typing this well into the night afterwards, that argument is arguably void. Anyway, what I’m trying to say is that I think it could have been tightened up a bit here and there, and perhaps added in a scene or two of downtime so I could catch my breath, but these are minor quibbles. Now that I think about it, I’d probably have rolled my eyes pretty fucking hard if there was a bullshit moment of downtime where Paxton and Sadler started ruminating on God, or their childhoods, or some other bullshit male bonding trope, perhaps all intercut with a similar conversation between the Ices. Yeah, nevermind, I’ll take Trespass as it is, flawed and completely devoid of needless character development.

The other thing that bothered me, and it’s also rather minor, is that Ice Cube’s role was too light for my taste. This was Cube’s next movie after Boyz n the Hood, but he never really gets a chance to flex those muscles here because he’s too busy spouting thug lines and firing a gun at Bill Paxton. Neither of those are really deal breakers, it’s just that I would have preferred him in a role that allowed him to do more than that. Eh, you can’t win ’em all. Trespass delivers more action, thrills, and excitement with its sub-$20 million budget than I could have realistically hoped for. Remind me again why there aren’t movies like this anymore?

Oh, and the ending is perfect, but don’t get up to pee just yet. Make sure you stick around for the credits and the theme song to Trespass, Trespass, written by and featuring both Ice T and Ice Cube. Check out the dope video too (Thanks Jasper!). It’s a great track, and for a closeout to Ice Fest it really doesn’t get any better than that.