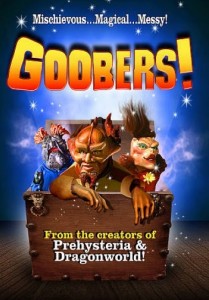 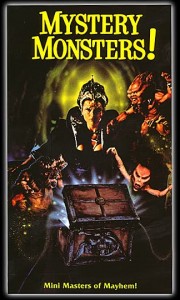 I don’t remember exactly how Queen Mara realizes where her box of goobers is thirty years after it was stolen, but soon after this poker scene we’re treated to one with Queen Mara and her minion Groon in their interdimensional fortress in the Bottomless Pit. They vow to come to Earth and reclaim what is rightfully theirs, and so Mara disguises herself as an Executive Producer to buy the studio and all the props (including her magical chest of Tron). Queen Mara and her goon Groon have a thick vibe of over-the-top Power Rangers villains, and they were immensely enjoyable. You mileage will vary of course, but I loved them. Mara’s lack of knowledge of Earth customs also allows the film instances to educate the viewers on the definitions of such things as: FBI, SEC, contract, interest, and binding agreements. Future lawyers, this is a must watch!

The TV show’s titles are newly created for this rebranded edition, as are some of the magic FX. These are all comparable with Full Moon’s recent uses of CG in their films and done fairly well in terms of the budget here. The scene early on where Captain Mike tells Tommy the rules has a few times when he mentions the goobers, but every time he says “goobers” it’s pretty hilariously dubbed in to remove any mention of their original name, the mystery monsters. The visual editing is quick to cut to Tommy’s face every time the goobers are mentioned as well. It’s funny, knowing the backstory to the film, and it makes me wonder why Full Moon would even bother. Perhaps Goobers! will trick more people into renting the film than the title Mystery Monsters would, but at least for me, I’d have watched it regardless. The original title is still visible throughout too, on the ship’s sails and the dressing room doors, but these details will definitely go over the heads of younger viewers who manage to make it through the opening scene.

The goobers themselves are pretty awful, and by that I mean fantastic. Squidgy is the best looking of the three, with his close-ups being a guy in full facial makeup as opposed to the poorly articulated puppets the other two get. He also is the voice of the three, talking to the kids in a wonderful English accent. Esmerelda goes through the whole movie waving an arm inconsistently and barely moving her mouth while mumbling out some unintelligible nothings. She has a wonderful moment when she uses Tommy’s mother’s makeup and stares into the mirror plaintively as the camera slowly pulls back. She looks deep into her own eyes and then puts her head on the table, all the while mumbling incoherently. She is the washed-up actress stereotype in interdimensional puppet form, and I loved it. Finally we have Blop, who’s kinda like Cookie Monster in that he loves to eat stuff and he’s kinda ugly, but while Cookie Monster is endearing and full of life, Blop is so strange looking and moves so slowly you get the feeling he’s eaten himself to the point of sloth consistently. Perhaps Blop is a Cookie Monster that just took a wrong turn. In this tough economy, even Cookie Monster should be thankful for his well-paying job. Blop only has a few lines, but they’re all through a thick, Blopian accent that’s hard to understand and simple-minded. That being said, I loved him as well.

The first half of the film is the standard Full Moon film with everything dragged out longer than it needs to be. Most films will have some details spelled out through the editing, but in Full Moon films, these minute details are almost always exaggerated and expanded to fill up the runtime of the film. There’s a lot more story here than in their recent offerings, but compared to a mainstream kid’s film, this one is pretty threadbare. There’s about enough plot for a thirty-minute kid’s show, stretched into eighty-minutes. But that’s OK, because the last twenty minutes are nearly pure action and intrigue, as the kids finally team up and take on Queen Mara and Groon. The finale is rather clever and fun to watch, making me wish that the entire film was as exciting.

But I don’t want to be too harsh to this awful movie, I had a grand time watching it. I usually go into the Moonbeam films with very reserved expectations, but Goobers! was entertaining throughout and got me to laugh out loud a number of times. It’s definitely on the campy side of the spectrum, so be warned if you decide to venture out to your local Redbox in search of this. I laughed, I cried, I thoroughly enjoyed myself watching this. I’m sure that indicates some screws are loose in the old brain, but I don’t care. Goobers! is absolute trash B-Movie fun. How can I not enjoy a kid’s movie that features a torture scene involving knives and brass knuckles?

I’ll leave you with the best quote in the film, as Queen Mara signs the contract and seals it with a drop of blood from her finger cut by “the sacrificial blade”.

“By this, my royal blood, the blood of the serpent, I hereby affix my sign and my oath. May I be burned and torn asunder if ever I should break this oath, until the final day and the last star has grown cold.” Now that’s how you sign a contract! I’m gonna have to remember that for the next time I sign something.

I can’t find a trailer for the life of me except for the one at the Redbox website, so go here if you want to see the trailer.

Next time, I’ll be checking out Full Moon’s The Haunted Casino with Sid Haig and Michael Berryman!