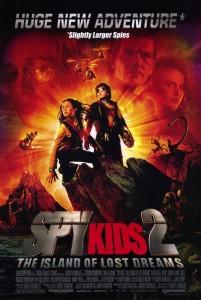 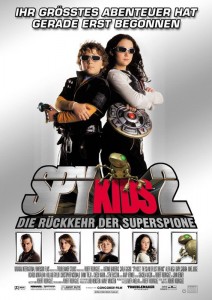 What makes Spy Kids 2 so relentlessly fun is this bottomless fount of imagination. Nearly every moment of the film is punctuated by big ideas and cool visuals, something I know that I would have dug if I had been a kid during the original release of these films. Spy Kids 2 is a giant, FX-laden film aimed directly at kids, and is therefore something of an anomaly. Most films for kids seem to be completely computer animated or somewhat low-budget efforts with a minimal amount of FX work. Rodriguez and crew pull out every stop here, making a giant, blockbuster kids film.

But that’s the thing. This is Robert Rodriguez and this is a low-budget film (at least in Hollywood terms). His “10 Minute Film School” features on his DVDs are always a must-watch for me, and the one on Spy Kids 2 makes me appreciate the film so much more. It’s so impressive in fact that I think it could win over a Rodriguez naysayer. This low-budget spirit is exactly why I love Rodriguez, even while actively thinking that most of his movies are just OK. He’s a guy that plays by his own rules and remains true to the spirit of filmmaking, even though he’s completely embracing the digital revolution. It took me a while to get over myself about that fact, but once I realized exactly what he was doing, I knew the only option for me was to respect him completely. It’s easy to watch the movie and criticize how most of it is done in post, but I dare anyone to watch that 10 Minute Film School and not be at least somewhat more respectful of Rodriguez’s ability to ingeniously think around filmmaking problems.

Now, if we put aside respect and just look at the facts, there’s just as much to laugh at in Spy Kids 2 as there is to be amazed by. And I’m not talking about clever jokes. No, I’m talking about shitty 2003 low-budget CG, and man does this movie have a lot of it. Some of the CG backgrounds do look great, but some of them look more like they were ripped directly out of a late 90s FMV adventure game. I kept expecting the screen to pause at any moment and a pixellated mouse cursor to emerge so I could direct Juni to LOOK, GRAB or EXAMINE the things around him. There are a couple of moments where the CG characters have something of the jerky nature of stop-motion, and while some might call this sloppy, I’m sure it was intentional. The creature design and a few specific moments pay direct homage to the classic work of legend Ray Harryhausen. I’m a big fan of his work, so this made me smile.

For the most part, I greatly enjoyed watching Spy Kids 2. It has a fun, adventurous spirit that makes it hard not to get excited while watching it. Add in some great supporting roles by Steve Buscemi and Ricardo Montalban (two of my favorites) and we’ve got a great kids movie that everyone can enjoy, so long as you still like ridiculous fantasies involving giant monsters, spy gadgets and underwater getaways. Sure, it’s pretty dumb, but if you have kids, I’d definitely recommend checking both this and the original film out.