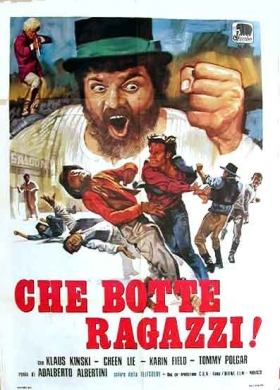 Joe’s non-existence in his own film is only one of the major oversights that went into making this film. Another huge one is replacing Chen Lee (the actor who played Joe in the original) with a poor knock-off that looks nothing like him named Cheen Lie. At least in Bruceploitation films the actors generally looked something like Bruce Lee and tried to mimic some of his trademark moves. Cheen Lie does no such thing and is easily one of the most boring elements of the film. I wonder why this is his only film credit.

With Joe missing, most of the screen time is split between the “hilarious” antics of the salesman and the cigar chomping Klaus Kinski. You might remember that Kinski memorably played Scalper Jack in the original, but here he’s just your average evil landowner that’s in every spaghetti western. He’s known for his craziness, but you’d never know it from this film. He seems almost as bored as I was with the material, but at least in his scenes there’s an air of tension as you never quite know how he’ll deliver a line or overact a given moment. Tommy Polgár plays the salesman and is easily the most charismatic of the bunch. That’s not saying a lot, but it does look like he was trying.

As suggested by the poster, Polgár is essentially the main character and herein lies another of the film’s major faults. Instead of keeping the dark, violent tone of the original film, The Return of Shanghai Joe re-focuses itself on the dumb spaghetti western comedy sub-genre. I have yet to see one of these films that’s worth watching, and this one isn’t doing the genre any favors. The laughs just aren’t there; most of the time I couldn’t even detect that there were jokes that were falling flat, instead everything just cruised by in a boring, energy-sapping haze.

And the fights! Jesus Christ are they shitty. Every fight in the early part of the film is scored by the awful 60s pop theme song that truly must be heard to be believed. It’s actually a pretty catchy song and I found myself singing it to myself after the film was over, but it’s the antithesis of what music over a fight scene should be. I did come to enjoy hearing the song play out over the incredibly awful fights, but even that wore on me after a while. The best fight (and the first one to not play the theme) is when Joe takes on a few cowboys in an empty saloon. The fight itself is horribly choreographed and filmed, but it starts off with a bang as Joe hurtles himself into the fray by cannon-balling down on the bandits from the second story landing.

There are some good comedic lines, though I’m pretty sure the comedy here is unintentional. First up are the dying bandit’s words of wisdom, “Tequila is like the mother’s milk.” But my favorite comes from a peasant’s mouth when they discover oil while trying to find an underground water source, “This is some diarrhea, not water!” I’ll have to remember that one for the next time someone serves me some nasty water.

Where My Name is Shanghai Joe showed an understanding of both the western and the kung fu genres, The Return of Shanghai Joe shows the exact opposite. It’s not competent at anything it attempts and is truly a chore of the highest order to sit through. If they had at least delivered some sporadic thrills, I’d be willing to forgive a general lack of story or directorial skill. Hell, the original didn’t have much of a story, and that one was awesome. Ugh, there are definitely worse movies than this, but this one feels a lot worse because of how great the first film was. Shoulda just re-watched that one.

Oh and by the way, the film ends by informing us that Shanghai Joe was a federal agent the whole time. What the fuck? I did get a chuckle out of that, but again, I’m sure it was unintentional.

Here’s a piece of the movie. I don’t recommend watching it.