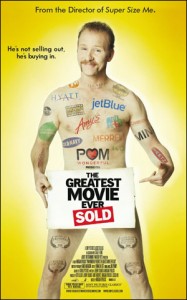 Morgan Spurlock’s latest film isn’t so much of a documentary about marketing as it is one about making and securing financing for The Greatest Movie Ever Sold. It’s a movie and a DVD extra all rolled into one. In filming and documenting the product placement and marketing process, Spurlock creates an interesting and fun ride from start to finish as we watch the movie we’re watching get made. I’ve been a big fan of everything Spurlock has put out since his début film, Super Size Me, and while this one isn’t up to par with his past features, it is remarkably fun. Spurlock’s mindful yet playful style comes across well and his pitch meetings to the companies are some of the film’s funniest and best moments. But not nearly as funny as the ad to the left of this post! I’d click it if I were you! How’s that for shameless marketing?

The Greatest Movie Ever Sold does make good points about the non-stop barrage of marketing, but as it’s more focused on the making of the film you’re watching, it never quite reaches the heights it could have if it were a more traditional documentary. Spurlock has never been one to sit on the sidelines and observe though, instead throwing himself into the deep end of whatever subject he’s tackling and hoping for the best. This is the predominant signature that defines his films and without it, they wouldn’t be nearly as engaging or fun to watch.

There was one thing in the film that got me thinking about how I could implement it into the site. Spurlock visits a neuromarketing lab where they strap him into an MRI and watch his brain react to commercials to see what works and what doesn’t. I wish there was a way for me to incorporate this feature into my reviews, where each post would come with a brain scan image showing exactly how I felt about a film while watching it. You could actively see if I was engaged or bored, or if I received a natural shot of dopamine from a certain moment. It would definitely set me apart from the mass of film bloggers out there!

I don’t really have much else to say about this one, other than if you dig Spurlock, you’ll most likely have a good time with this one. The Greatest Movie Ever Sold is pretty light overall, but there is some interesting information presented and Spurlock’s clever style and fun sense of humor makes the film breeze by. Definitely recommended to anyone that has an interest in marketing as well.