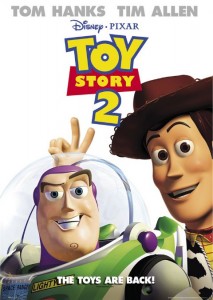 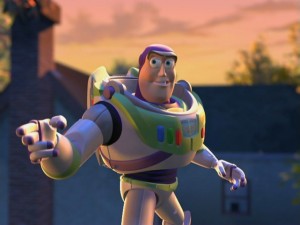 A couple of years have passed and Andy’s taking his yearly trip to cowboy camp. His faithful companion has always been Woody, but when Woody’s arm rips, he is promptly shelved and left at home. This eventually leads to Woody being kidnapped by a local toy store owner and the rest of Andy’s toys must save the day! The fast-paced chase structure of Toy Story is retained here for the most part, but there are more contemplative moments than before, mostly when Woody is with Jessie and Pete, the members of his Roundup gang. These scenes might slow down the pace a bit, but they add a lot to the Woody character, where the first film sought to set-up the mythology surrounding Buzz Lightyear.

Graphically, Toy Story 2 is the definite step-up as you would expect. There are very few chinks in this armor, which is pretty impressive for a computer generated film made twelve years ago. It’s more impressive given the history of Toy Story 2, beginning life as a direct-to-video sequel before being completely re-worked from the ground up in about nine months in order to meet the scheduled release date. For only the third Pixar feature, it’s clear that they were learning fast and solidifying their style and confidence with each picture. I have to imagine the opening scene with the new dog looking for Woody is meant to show naysayers right off the bat how much better they’ve gotten and quietly apologize for Sid’s lackluster-looking dog from the first film. 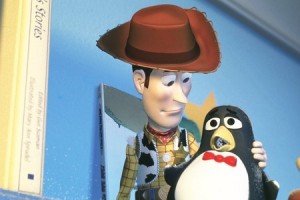 Toy Story 2 features stronger overall storytelling than its predecessor and has a great moral undercurrent on the value of love. Woody is faced with a tough decision when he meets the rest of his Roundup gang. He wants to please them by becoming a museum piece and forgetting about Andy, because realistically Andy will eventually abandon him anyway. It’s the easy option, no fighting or risk involved. When Andy’s toys bust in from the air duct though, he falters. Will he risk a life of detached adoration to take a chance on the diminishing love of Andy? It’s a fabulous example of “It’s better to have loved and lost, than to never have loved at all,” with the mint-in-box Stinky Pete character delightfully filling the “never loved” role. The moral underpinnings of Toy Story 2 are more upfront than they were in the first film and show how the primary focus has shifted from world building to character building. 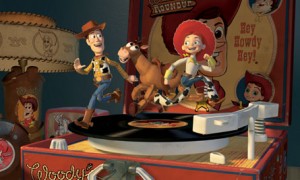 All this focus on character doesn’t mean they skimped on the adventure thrills though! There are tons of great action chase sequences, this time involving a lot more of the toys instead of just Buzz and Woody. For whatever reason, there are also a number of Star Wars references peppered throughout the film, a couple through clever sound effect usage and one direct one to The Empire Strikes Back. Like that film, Toy Story 2 feels like the darker, middle part of a grander story. It works on its own but it somehow feels unfinished. Jessie’s backstory involves her abandonment from the human that loved her, introducing the first tear-jerking scene to the series and addressing for the first time the inevitable aging of a toy’s owner. In Toy Story, the toys were concerned with replacement by a better toy. In Toy Story 2, they fear the dumpster. Great, as if I didn’t already feel bad for throwing out old stuff, now I have sad, tender images to associate with it.

Toy Story 2 hits all the right notes and is a great sequel. It doesn’t quite reach the same levels of fantastic cinema that the first film achieved, but it is a success nonetheless. I look forward to finally checking out Toy Story 3 and the conclusion to the abandonment storylines started here. Get your Kleenex™ out for next Wednesday!