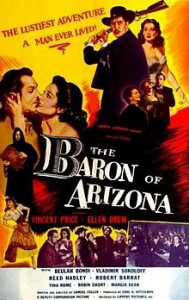 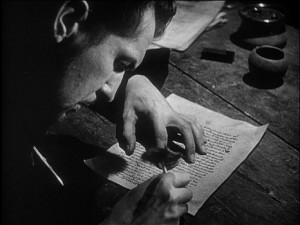 Vincent Price stars as James Reavis, an accomplished forgery artist and quick-minded schemer who concocts a master plan to steal the Arizona territory and all its mineral rights right from under the nose of the United States. His plan is multi-layered and complex, taking several years to put into place before he can bring it to light and make his claim. Most of the film chronicles these great lengths he goes to and it is a joy to watch. The sheer scope of the adventure is staggering for the budget of this picture, and is a testament to the expertise of Fuller and the veteran cinematographer James Wong Howe. When Reavis reveals that he must travel to Spain to change an entry in the original text of the land grant documents that are held in a remote monastery, there is a moment when it becomes clear that he means to enter their monastic order and work through the ranks before he can get to the book. Reavis’ determination to accomplish his goal is shown in this moment as he never falters or thinks twice about this commitment, instead willfully entering into years of basic monastic servitude, keeping his eyes on the prize at all times. The overwhelming confidence of Reavis is infectious, building the viewer’s connection and the desire to see him succeed. 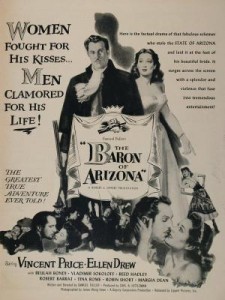 As I mentioned before, this isn’t really a traditional Fuller picture with frank depictions of violence and a hard-on inducing opening scene (Fuller famously said “If the first scene doesn’t give you a hard-on then throw the goddamn thing away.”) but it does expose an interesting underbelly sort of tale that characterizes many of Fuller’s later pictures. At its heart, The Baron of Arizona is a grand adventure featuring thrilling and tense scenes throughout. A love/hate relationship with Reavis builds in the viewer as time passes, thanks to skillful handling of the adventure scenes, alongside the more tender moments between Reavis and Sofia, the orphan girl he fashions into his Baroness and eventually falls in love with. This love story is one of the parts partially devised by Fuller, and while those looking for historical accuracy will scoff, this is the emotional heart of the film and 100% necessary for its success. Sofia appears as a pawn throughout but comes t0 play pivotal role, delivering a deep-felt emotional close to the film.

The entire picture flies by before you know it as both Fuller and James Wong Howe understand completely what it means to use the camera to tell the story. Together they capture the obsessive nature of Reavis in style with shadows and emotive close-ups. It’s a shame they never got to work together again, as it seems they understood each other and delivered a polished finished product. Vincent Price is masterful in his first starring role, playing the conman James Reavis with such charisma and power and confidence, proving definitively why he went on to have a long and storied career. Vladimir Sokoloff is also excellent as Sofia’s caretaker Pepito. Reed Hadley (who played Jesse James in Fuller’s first picture) plays forgery expert John Griff and is a worthy adversary for Price. The two actors get a couple of scenes together and they are high points of the film. 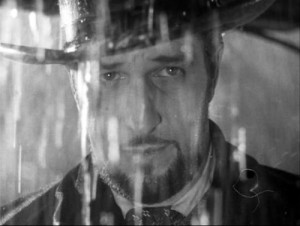 The love story between Reavis and Sofia is an interesting part of the script, being slightly unbelievable but emotionally effecting at the same time. When Sofia is young, her impressionable eyes look on Reavis with wonder. As the man who rescued her from a life of poverty, he is the savior, the angelic being that can do no wrong. We, as viewers, know that he has another motive, but it is clear in these scenes that Reavis does share a connection with the girl and isn’t funding her new lifestyle simply for his scam. It’s almost as if he is acknowledging and atoning for the wrong he is doing by helping and being nice to this young orphan. In any case, he wisely keeps the relationship at arm’s length, venturing off to Spain for many years as Sofia matures and obsesses over his return, her love growing exponentially in only the way a naïve child’s could. Upon his return, Sofia is near speechless in her happiness and excitement, and when Reavis asks for her hand in marriage she admits it is something she has longed for. It is here that you begin to hate Reavis, as it’s one thing to steal some land from The Man, but crushing a young girl’s heart in your climb to the top is not as easy to get behind. There’s a great moment later in the film when Reavis is forced into a corner and must fight his way out in front of Sofia and she is horrified by what she sees. The angelic savior of her dreams is shattered and replaced with a flawed, liar of a man.

The Baron of Arizona is a fun adventure film with a heartstring-pulling emotional center. It may lack the grand statements that Fuller’s pictures usually have, but it does have enough thrills and emotion to delight during its entire runtime. I’m still amazed at how much Fuller was able to pull together with such a small budget, making an overall better film than his début and giving the world its first Vincent Price starring role. Totally worth your time, The Baron of Arizona is another forgotten gem in the pantheon of 1950s cinema from Samuel Fuller.