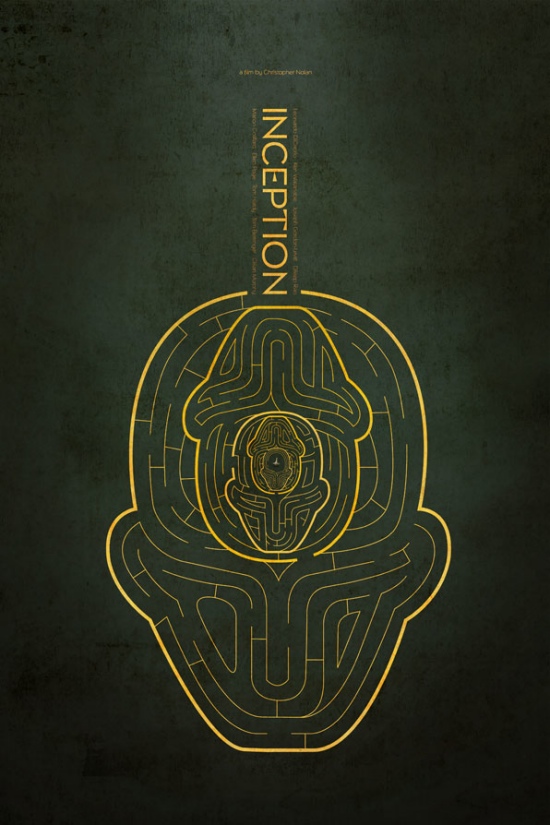 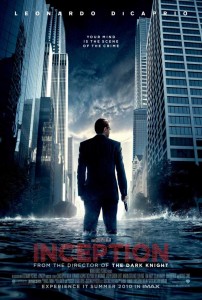 Ok, for those still with us (Inception viewers and brazen people who did not heed the warning), Inception is the movie of the year so far, without a doubt. I can pretty safely say that nothing is going to top it in this rather lackluster film year. I realize there are lots of movies still to come, but just like when I saw Inglourious Basterds last summer, I knew instantly that it was going to be my favorite of the year.

Inception is a hard film to summarize. Leonardo DiCaprio is a professional, trained in the art of extraction. He and his crack team of operatives are able to enter a person’s dreams in order to unlock and steal secrets from their own mind. DiCaprio finds himself stuck in a bad situation and must accept a seemingly impossible job… and we’re off. The film unfolds and intrigues the viewer right from the get-go, with Nolan’s trademark of starting the film with a slice of pivotal scene from later in the story.

DiCaprio gives what is easily my favorite performance from him. I’ve never been a huge fan and was disappointed when he was cast. He quickly set fire to my expectations and simply ran away with the show, giving a commanding and convincing performance. A good man’s only as good as the people he surrounds himself with though, so credit must be given to the fantastic supporting cast. Joseph Gordon-Levitt showed new depth and range and Tom Hardy proved to be one of my favorite members of the team. The casting of Ellen Page worried me a bit as well, but she handles her scenes well and while it’s easy to question why they’d trust and bring her character along for the ride, I am willing to suspend my disbelief for the sake of such an enjoyable film. 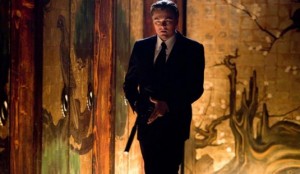 Nolan’s directing feels more mature and solid than previous efforts, with his abundant confidence in the material coming right through the screen. The script is smart and constantly unveiling something new. It is so refreshing to go to the movies and see something truly original. I can’t remember the last time I’ve seen so much sustained imagination and excitement packed into one film. It doesn’t fall into the standard Hollywood trappings of “highly trained operatives” movies either, so every character has a purpose instead of one guy just being around for laughs and the girl just being there for one (or many) of the guys to get it on with.

Now having said all that gushing bullshit, it might seem like this is Nolan’s new masterpiece. For some this may be true, but I think I still prefer The Prestige or The Dark Knight to Inception. I’ll have to watch them all a second time and get back to the question. Inception has only a few moments that sag, but its most obvious flaw is that the supporting characters are all very minor and do not have any character arch to speak of. They come off as fairly shallow and are essentially only there to move things forward. This worked for me because it allowed the focus to be elsewhere, but some will definitely have more of a problem with it. The main emotional depth comes from the trio of DiCaprio, Page and Cotillard and they easily pull off the huge responsibility, sucking the viewer into their struggles. I was surprised that the film was pretty straightforward for the most part, being far less of a mind-fuck than I expected. It all made perfect sense, and while a second helping would definitely bring new light to the experience, I didn’t walk out confused in the slightest. This is either a testament to Nolan’s well-written script that he supposedly worked on for the last 10 years, or evidence that I am becoming older and wiser… Yeah, it’s probably more on Nolan.

Nolan presents his fans with an original science fiction film that exemplifies the best traits of the genre without resorting to typical Hollywood trappings. He is the best hope for the survival of true science fiction in film and I must applaud him. So often Hollywood simply throws an action movie into the future or space and calls it science fiction, but here Nolan works from a fairly simple idea and runs with it in ways that only a true visionary that understands the genre could. As much as it is a horrible time to be a science fiction fan, Nolan is a shining example for the new generation of speculative fiction authors and filmmakers. With Inception, he schools Hollywood and shows how true science fiction is a skillful blend of imagination and action that will heartily please fans of both genres.