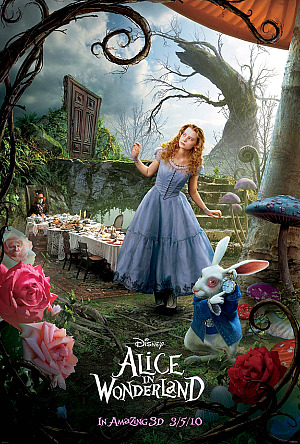 I normally would have avoided this but for some unexplained reason I decided to give it a go. I’m a fan of the original Alice story and I was curious to see how Tim Burton would film it, but the ridiculous amount of CG told me to steer clear. Burton’s later work for me has been fairly hit or miss, so I didn’t go into this with any expectations that I would enjoy this at any meaningful level. Like many things that your intuition tells you to avoid, Burton’s Alice in Wonderland is definitely one to go into treading lightly.

I was intrigued quite a bit by the opening 40 minutes or so. It was paced well and it was interesting to see how the older Alice reacted to the various things in Wonderland. The CG work is actually pretty good and lends the film an animated quality. That’s not to say that it isn’t excessive though. Virtually everything in the film is CG, including the horses that characters ride upon. Surprisingly the computer imagery is not my main beef with the film though. It’s Burton’s complete lack of emotion or energy with this film. If there’s ever been a guy that needs to take a few years off and reconnect with his passion, it’s Burton and this should be Exhibit A. It’s lifeless and the plethora of CG doesn’t help. No thanks.

Oh, and it has what is probably Danny Elfman’s most tired, boring, passionless score as well. Maybe they were going for passionless as a motif?