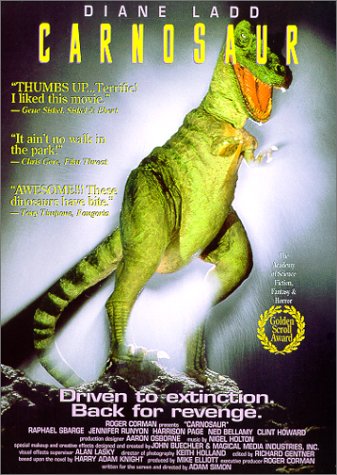 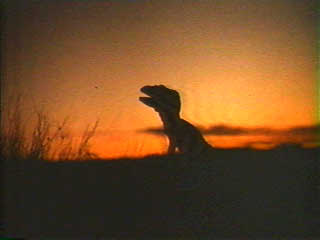 Sadly, despite all of the excitement, I think I fell asleep within the first 20 minutes. Now rewatching this film almost 20 years later I was almost instantly reminded why. For all its promises and high hopes, Carnosaur is pretty fucking dull in its first half. After a somewhat promising opening featuring a rabid chicken attack and roadside baby raptor mauling, the film gets ridiculously talky and bogged down with long, drawn-out lectures and mundane tirades about genetic manipulation, DNA analysis, and miscellaneous biological technobabble. Seriously, I was almost expecting some college credits after sitting through all of this shit. We do get a few moments of choice action in the form of a baby dinosaur tearing through a jeep full of drunken teens, but sitting through long stretches of genetic theory and  bland discussions on the ethics of bio-engineering almost makes it not worth it.

It’s not until some environmentalists chain themselves to a corporate bulldozer and unwittingly become helpless food for the hungry raptor that the film decides to forego its attempts to scientifically validate itself and instead concentrates on fun dinosaur attacks and its surprisingly bizarre plot (which unfortunately comes with the cost of more boring bio-talk). 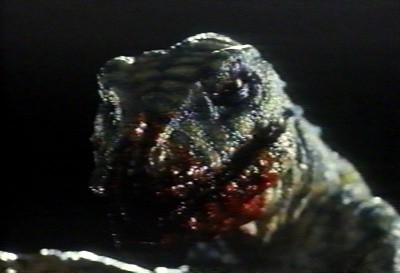 Diane Ladd is a nutcase scientist who is using a somewhat shady poultry farm as a cover for a devious plan of her own. The film is a little sketchy on a few points, but from what I can gather, she injects a strand of prehistoric DNA into a one of the chickens, making it lay a dinosaur egg. When a baby carnivore hatches, it tears through the local Nevada desert town raising hell, and sprinkling its genetic virus down through the locals. Diane sees mankind as a plague and a pitiful follow-up to the reign of the dinosaurs. Her plan is to reintroduce the long-extinct beasts by infecting human women with her cooked-up virus, forcing them to give birth to rapidly-maturing velociraptors. The birthing scenes are unexpected in a film that promised nothing more than fun dino-carnage. Watching these women spread eagle and pop out baby velociraptors is not only a healthy deterrent to unprotected sex, but also nothing short of fantastic cinema that almost manages to redeem the tedious first 45 minutes of the film. Ms. Ladd even sacrifices herself to her noble cause by giving birth to her own prehistoric offspring. In the film’s most over-the-top moment, she spreads out a blanket and goes into labor. Annoyed with the length of the birthing process, she gives herself a self-induced cesarean section by clawing open her own stomach, revealing a tiny raptor that pops up, whack-a-mole style.

When the film finally gets going, it definitely has its share of decent moments. An innocent security guard gets decapitated by a hungry dinosaur, an unsuspecting sheriff cracks open some tainted chicken eggs for breakfast, revealing tiny, wriggling dinosaur embryos inside, and Diane Ladd’s pet T-Rex escapes the facility and goes on a murderous rampage, ending in a climactic battle with a couple of high-powered bulldozers. 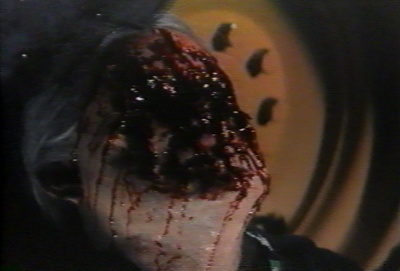 The movie ends on a remarkably strong note as the film snuffs out what looks to be a happy ending by brutally turning the tables on our heroes in the final seconds of the film, giving us the classic despair-filled “zombie outbreak run amok” kind of ending that we have come to love.

Special FX by John Buechler of Empire/Full Moon fame is actually halfway decent by B-standards. Animatronics and puppetwork are miles above previous low budget dinosaur outings. These clearly are not refined products of the Stan Winston studios, though. The dinosaurs suffer from mobility issues, which are simply disguised by not having the legs in frame. The shortcomings of the baby velociraptors are hidden by shooting their action scenes with blurry handheld camerawork, coupled with rapid-fire edits. The rampaging T-Rex seems to change size at will, but despite the scale inconsistencies it’s still good fun.

If you have the persistence and sheer fortitude to make it through the painfully meandering first half of the film, Carnosaur will deliver at least a few money shots before it’s over, and at the very least, amuse with its farfetched, bizzarro plot.