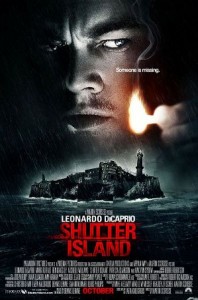 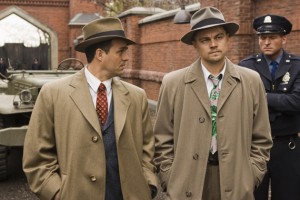 Scorsese opens with a number of choices meant to evoke 1950s cinema. The opening on the boat is very obviously green screened. Since this is 2010 and I know that they can make it look better than that, I have to imagine that it was done as a stylistic choice. Scorsese loves his 1950s cinema, so it seems like something he would do. There’s also a number of fast, blurring whip pans. The loud, menacing music reminded me of the scores of classic films, where the music was dramatic and a character unto itself. I loved the score and I was surprised to learn that it was all “found music,” meaning that nothing was composed for the film. Robbie Robertson (of The Band fame) collaborated with Scorsese on the soundtrack and did a masterful job. While there are moments throughout that showcase this retro film aesthetic, it is mostly contained within the opening half hour in order set the film’s tone. These extra touches blend perfectly and create a believable 1950s period piece. It gives the film the quality of being an artifact, something lost and now found.

The acting is fantastic all around. You can’t go wrong with the list of great actors present here, with Ben Kingsley and Max Von Sydow especially impressive in their roles as administrators of the mental health facility. The movie is very well cast, with the possible exception of DiCaprio. He’s excellent in his role, but between the baby face and the half-grown scraggles he calls a beard, he’s a hard sell as a seasoned U.S. Marshall. It’s a testament to his power as an actor though, as despite all that he pulls it off. He carries the movie completely but there’s still an emotional disconnect between his character and the viewers, which ultimately sucks some of the wind out of the conclusion.

My main problem with the film is that it’s just too long and meandering in places. At 137 minutes, it drags when it should thrill. I really liked this film, but it could have been excellent if it had been tightened up a bit. Writing about this movie is so frustrating because while I greatly enjoyed what worked about this film, ultimately I keep coming back around to the missed opportunities to should have made this film stand out completely and shine. This could have been the home run that Robert Redford hits in The Natural, right into the lights, with sparks and accolades raining down. Instead it’s a triple that missed going over Fenway’s Green Monster by just a couple of inches.