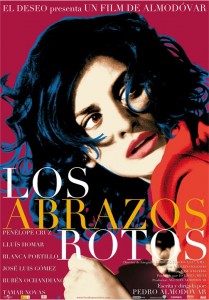 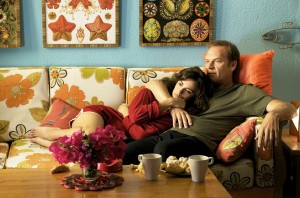 Of the three Almodovar pictures I’ve seen (Talk to Her and Volver being the other two) this is by far the least overtly sexual. It was borderline mundane in that way, where I have come to expect edgy, frank and real depictions and discussions of the sexual nature of humans. That is not to say that Broken Embraces is devoid of sexuality, in fact it flows and pulses with sexual energy but it is more reserved and subtle than what I expected. I don’t mean this to sound like a complaint though, as the subtle nature of the script was perfect for this story and worked very well on-screen.

Almodovar has said that this film is his love letter to filmmaking, but it is done in such a way where it isn’t immediately clear that’s what he’s doing. Even after the film ended I was slightly puzzled about it because I felt that there was more homage to the craft in Talk to Her than this. After a couple of days of revisiting it in my mind though, I realize now how deep it runs throughout the film. Editing is one of the most important and misunderstood aspects of the filmmaking process, and it is editing here that is the key point. Broken Embraces seeks to impart how important editing is to the final product, both in plot points and in actual practice. This is one of the best edited works of 2009, running a close second to Tarantino’s Inglourious Basterds. 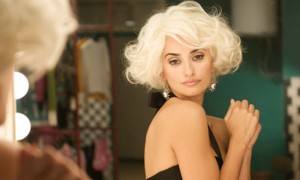 Almodovar is by far my favorite visual filmmaker working today. I am constantly amazed by how well thought out and beautiful his shots and framing are. Not a single shot is wasted in this film, every one perfectly composed. A pile of torn photos, a curtain, even an x-ray of an arm all look beautiful and distinct through Almodovar’s lens. Every frame is exploding with a painter’s palette of colors, but nothing seems flashy about his style. That’s the amazing thing. It’s easy to be flashy and have people flock to your films, but to be stylish without overusing flash is brilliant. 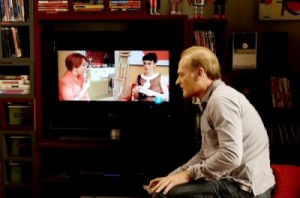 I’ve heard that his earlier films have a different tone and style (supposedly more flashy and less mature) than the later-period movies that I have seen. I might be way off base here, but ever since I saw my first Almodovar film I’ve felt that he is a kindred spirit to Quentin Tarantino. Quentin is definitely flashier and he “borrows” too much, but both directors share such an unabashed love of the art and language of cinema that I can’t help but think of them in a similar space. I can’t be the only one to think this though, as last year’s foreign language Oscar was presented by none other than both Almodovar and Tarantino.

I can’t recommend this movie or Pedro Almodovar enough. It is auteurs like him that have made me passionate about film. He is reason enough to watch foreign films if you aren’t already doing so. I can’t wait to experience more of his films.