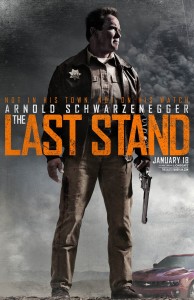 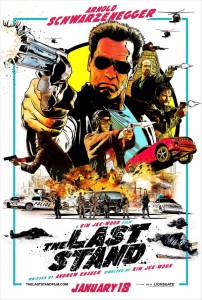 Say what you will about a 65-year-old action star, but Arnold does the genre proud in The Last Stand. He’s clearly not up to speed with his former self, but that’s OK because he’s 65! But honestly, Arnold’s age never really feels like a factor. There are a few moments where they clearly shot around his withering abilities, but these moments don’t lessen the impact of the film at all. The Last Stand is definitely a different type of action film than the ones we’re used to from Arnold’s heyday, but it feels like the perfect comeback movie for the big guy.

The Last Stand does take a little while to get moving, though. The film’s pace has something of a snowball effect, quickening over time, and I found it mirrored the aging Arnold rather well. He doesn’t spring out of bed, guns blazin’, he slowly puts one foot down at a time before shuffling himself to the bathroom to start his day. Perhaps saying that the film’s pace reminded me of an aging man isn’t the best selling point for the film, but it is what it is, and once that old man gets going he unleashes a hellish fury on these unsuspecting evil bastards that is an absolute joy to watch. Never before have I smiled so much at something as simple as a guy getting run over, but as this moment signaled Arnold’s return to on-screen action, it was special. Just know that it does takes a while to build towards this moment.

The Last Stand also has quite the sense of humor. It balances the brutal violence and the laughs well, even throwing in a few one-liners for Arnold, something I honestly never expected to make it into the modern Arnold films. These aren’t as classic as something like “Stick around!” or “Knock, knock,” but they get the job done and serve the film very well. ’80s movies had a wonderful sense of humor, and while this one doesn’t necessarily capture that same spirit, it does feel like something of a modern take on it.

Three stars is probably a bit generous, but for the genre it’s a fun, entertaining modern entry featuring the return of one of the greats. And the majority of the car stuff looks like it was actually done with real cars instead of bullshit CG. That alone is cause for celebration. Unfortunately, this one seems to have been received rather coolly at the box office, so don’t expect an industry-wide change back to physical car stunts anytime soon. I can dream, though.

We’ll have to wait and see if future Arnold films surpass this one, but even if they don’t, The Last Stand is a fun addition to the overall Arnold filmography. It could definitely be much, much worse, and frankly I imagine the films that follow will be closer to that bottom end. Hopefully I’m wrong, but I have to set my expectations pretty low or else I may find myself crying in the corner in a fetal position, devastated that the return of one of my favorites went so horribly wrong. Please prove me wrong, Everyone That’s Involved With Anything Arnold is Working On. If nothing else, it’s an exciting time to be an Arnold fan, with no less than five new movies in the works. Welcome back, Arnold… I’ve missed you!