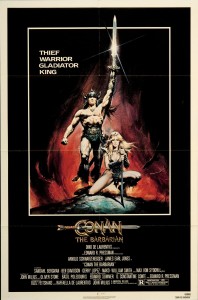 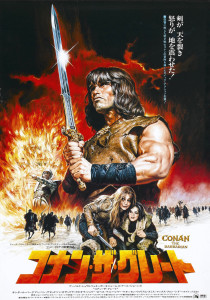 Conan the Barbarian also succeeds because it is largely a visual film, telling its thrilling adventure story without dialogue for long stretches of the movie. This allows us to drink in the luscious visuals, feast on the exciting action, and revel in the epic spectacle of it all. For a film this empty of dialogue, it is rich and bountiful in its set-pieces and its story. Conan the Barbarian has an exceptional ability to transport you to a distant time and place, and it mostly does so without the use of special FX. The illusion is all in the filming of the locations and in the wondrous production design. The sets range from the opulent temples of Thulsa Doom to the dingy back alleys of crowded cities, and every one is interesting and intriguing in its design. Only occasionally do FX come into play, and when they do, in scenes like the one when Valeria and Subotai fight off a group of spirits, they are unique and viscerally exciting. These animated spirits are especially magical, lending the scene a haunting quality that “better” CG FX would most likely not.

Also over the past year or so, I’ve had the chance to read through a whole book of Robert E. Howard’s original Conan tales. While there are definite differences between the two versions of the character (and purists likely still scoff at the mention of this film), I find the stories and the film to share a very similar feel. Conan the Barbarian may not hold true to the mythology or the history that Howard built for the character, but it does hold true to the spirit of the character and to the world. There’s also a few quick references to the stories in the movie that I never noticed before (such as the mention of black lotus as a mind-altering substance).

Conan the Barbarian remains one of the greatest fantasy films ever made. I love it to death, and every time I watch it, it weaves its powerful spell of adventure and epic revenge over my stay-at-home, boring little soul. And through its careful usage of locations and resources, Conan the Barbarian continues to be as effective a film as it was in 1982. I haven’t seen it yet, but I’m willing to bet the 2011 remake won’t stand up to that test in 2042. And if you still need more convincing, Conan beheads a gigantic snake during one of the many iconic scenes and the film’s score is one of the greatest works in the history of fantasy film scores.

Conan the Barbarian is a must-see for all fantasy fans, as well as anyone who digs on testosterone-fueled movies designed to make you want to buy a home gym, an anvil and a loincloth. Conan is the shit.