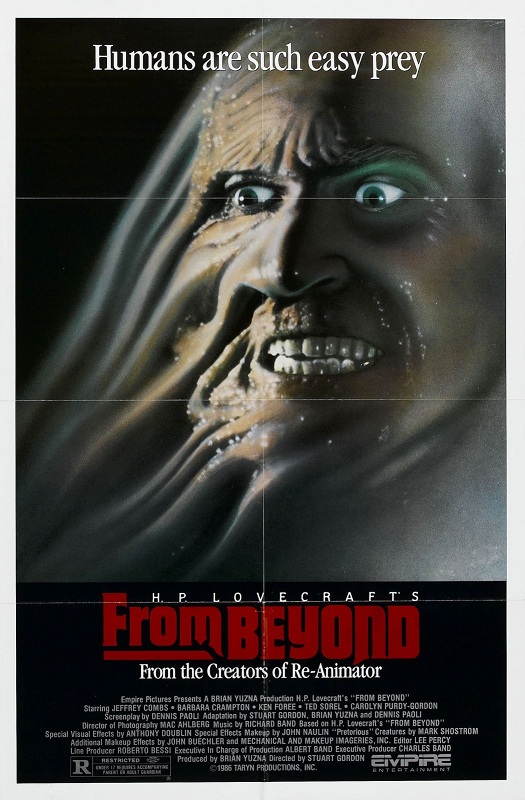 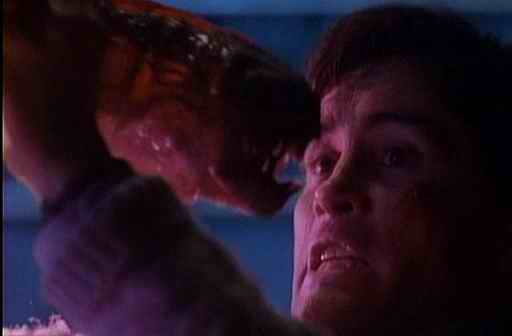 Obviously things go sour and this monster from beyond must be taken down. Things go a lot differently than I expected them to and I found myself happy and surprised at the story’s jukes. Similarly to Re-Animator, From Beyond takes its time getting to the juicy decadence, building characters and plot lines. When Gordon decides it’s time to take that turn into the abyss though, there’s no looking back. From around the halfway point until the end of the film, the shit just gets progressively weirder and more fucked up as it goes on. Needless to say, I greatly enjoyed this descent. While it probably could have stayed a bit cleaner and gone for the mainstream crowd, Gordon sticks true to his roots and delivers one fucked-up gem of a horror film. The villain, as seen above on the poster, is a wonderfully twisted design that continues to get progressively more mutated every time you see him, giving horror fans shit-eating grins for almost twenty-five years. 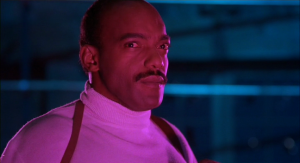 Combs comes off as the calmer, more laid back brother of Re-Animator‘s Herbert West; interested in science, but not really a madman. I kept expecting him to snap at some point, but he never does and I was really impressed with this restraint. Somebody has to snap though, so this time around Barbara Crampton pulled the short stick. Her conversion from tight-lipped doctor to leather-clad S & M diva is a bit unbelievable and inconsistent, but it does make for a couple of darkly comic scenes that are highlights of the film. And really, what horror fan cares about character inconsistencies when it allows for Barbara Crampton to be in various states of undress? Inconsistent? Yes. Gratuitous? You bet. Boring? Not a chance. Ken Foree is also a welcome addition to the small cast and plays his part admirably and with the style you’ve come to expect from him. My only complaint is that he wasn’t in it enough! 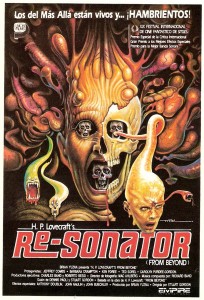 Gordon’s camerawork isn’t as creative and fun as it was in Re-Animator, but it serves the story well and is pleasing to look at. There are a couple of really killer shots sprinkled throughout, with one in particular of a woman running down a hospital hallway that reminded me of a white, vertical-lined version of the red, horizontal-lined “shutting off Hal” sequence in 2001: A Space Odyssey. Genre directors never get the credit they deserve and I think Stuart Gordon easily could have transitioned to mainstream films if he desired it. Thankfully, he loves gore way too much to do that.

These types of stories about hidden worlds co-existing alongside our own are always highlights for me. The beauty of them is that by nature of their structure, you are able to believe that this world exists around us, if only we were to build a Resonator of our own. I don’t necessarily want my head twisted off by a big tentacle though, so I think I’ll find some other world to play in. Highly recommended to Re-Animator and 80s horror fans. Also if you like strange horror/sci-fi tales, you’ll probably enjoy this as well.

Come back tomorrow for my last Dario Argento review for now, probably the one you’ve heard of, Suspiria!