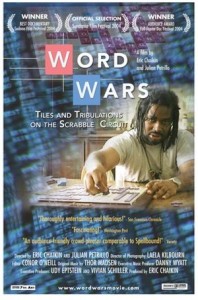 AKA Word Wars – Tiles and Tribulations on the Scrabble Circuit

Expectations: Moderate. I heard somewhere this was good. That was years ago though, so I don’t remember where or any specifics.

I generally take a few notes while watching a film. Depending on the amount of strange occurrences or abstract thoughts I have, I might take a lot of notes. For Word Wars, a movie all about words and their usage within the surprisingly competitive game of Scrabble, I took only two notes. The first was, “Total nerd out,” and the second was, “An alternate title could be Nerd Wars.” The nerd quotient is definitely off the charts, but that doesn’t mean it’s not enjoyable to watch. It should probably be noted that I self-identify as a nerd, so I’m allowed to call a nerd a nerd without any fear of vengeful repercussions.

Word Wars follows four men who are among the best in the Scrabble field. Three of the guys travel together and are tenuous friends, constantly on each other’s nerves. The fourth man is the reigning champion, a feat that the others attribute to his daily Tai Chi routines and his generally calm demeanor. But this year will be different: the combatants have trained, the calisthenics have been performed and now they are poised to strike! Hide your anagrams, hide your synonyms, and hide your antonyms too, cuz they scrabblin’ errbody out here.

I enjoyed watching Word Wars quite a bit, as in addition to the narrative surrounding the National tournament that the film and its subjects are working towards, there is a bit of a Trekkies vibe where the nerds are so intensely obsessed with their sub-culture that they can only come off as funny to an outsider. No disrespect intended, but some of the situations just demand a laugh. The only problem I have with it as a documentary is that it doesn’t really say anything of note. It follows the guys well, and it’s made with precision and skill, but there’s never anything resembling a point to it all for the viewer. To the men featured, there’s a genuine goal of winning the National tournament and the $25,000 prize, but the audience is left wanting something beyond that. It hurts the film in an overall sense, but as it stands it’s still pretty entertaining.

If you enjoy words and people watching, you’ll probably get your fair share of enjoyment out of Word Wars. It isn’t the most interesting documentary, but it’s never dry or boring. The men featured are characters enough to make every scene well worth watching.