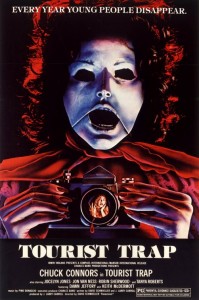 Tourist Trap is an interesting movie in that it’s both boring and oddly enchanting, daring you to close your eyes and not be haunted by the creepy mannequins with the mouths that open too wide which populate the more tense moments of the film. It’s a hard film to rate because I genuinely enjoyed and got a lot of entertainment out of it, but it’s almost completely devoid of plot and what is there is pretty obvious right from the get go to anyone even remotely familiar with horror films.

The film opens with a guy rolling a tire down a dirt road. He’s hot, tired and obviously a long way from home. He finds a gas station/restaurant and goes inside seeking some help with his tire. No one is around, but he hears something that makes him check out the backroom. He approaches the figure laying in the bed and it quickly springs up to surprise him. It’s just a mannequin, but when the guy turns to leave the room, the door slams shut and everything starts to go completely apeshit. Windows shut without anyone near them, chairs rattle, mannequins burst forth from closet doors. He’s eventually killed by a hurtling lead pipe that pins him to the door he’s been desperately trying to claw his way out of the entire scene. And this is only the beginning of the nightmare for this guy and his friends…