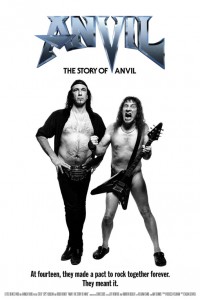 Anvil: The Story of Anvil is a tale of heart, dedication and dreams… and kick-fuckin’-ass metal! I’m a big metal fan, but I’m a recent convert so I had no idea who Anvil was going into this movie. Within the first few minutes I was instantly a fan, as Anvil’s impressive chops and thunderous melodies won me over with ease. The film shows the current lives of the band that was once on the forefront of the early ’80s metal scene, influencing the bigger bands that were about to breakout such as Metallica, Slayer & Anthrax. Anvil was there at the beginning, but due to some shit record deals and a few questionable management decisions, the only place they went was home to Canada with their instruments and their dreams. The thing about Anvil, though, is that they never stopped. Not to be deterred by their shit luck, Steve Kudlow and Robb Reiner kept at it, recording album after album and playing hundreds of shows for the local crowds.

Directed by former roadie Sacha Gervasi, Anvil: The Story of Anvil chronicles a rather fruitful time for the band as they acquire a new manager who books them on a tour of Europe. This eventually leads Anvil to record a new album, their thirteenth (appropriately titled This is Thirteen), and then shop said album around. The specifics of the plot aren’t the exciting part, but watching these guys interact and play their tunes with genuine heart and emotion is.

At times, this plays out like a real-life This is Spinal Tap, but the laughs are directed more at the surrounding circumstances then at the band themselves. Anvil: The Story of Anvil is a great story of the human spirit, of the will to continue despite all odds. Sure, dudes in their 50s keeping the ’80s metal dream alive may be kind of sad to some, but to me it’s impressive. These fuckers did it, they pushed on in spite of everything and it’s finally paying off for them.

They’ve recently released their fourteenth album, Juggernaut of Justice, recorded at Dave Grohl’s studio in Los Angeles. They’ve also been touring and playing huge rock festivals since the film came out. Hell, within minutes of finishing the film, I bought every Anvil album I could find and have enjoyed the shit out of them ever since. Up the irons and long live Anvil! Metal on Metal!