Looking into the box office records of Ho Meng-Hua’s previous films also sheds some light on the issue. Neither of his two 1971-released wuxias, The Lady Hermit and The Long Chase, did very well, with The Lady Hermit specifically underperforming at 75th place out of 83 films released that year. Ambush was filmed in 1971 like The Golden Lion, and when it eventually released in 1973 it also did poorly, ranking 77th out of 87 films. Both Ambush and The Golden Lion star Chiu Hung & Li Ching, and while Li Ching was a great part of many Chang Cheh films, neither Li or Chiu were big enough stars to carry films on their own. In 1975, The Golden Lion also performed poorly, coming in at 84th of 92 films. Ouch. Poor wuxia. 🙁 Thanks to Celestial Pictures and the passage of time, though, we are allowed to find the hidden gems that failed to resonate in their day. The Golden Lion is one such film… in fact, I’d say it’s one of Ho Meng-Hua’s best and most satisfying wuxias.
END_OF_DOCUMENT_TOKEN_TO_BE_REPLACED 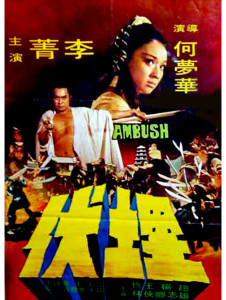